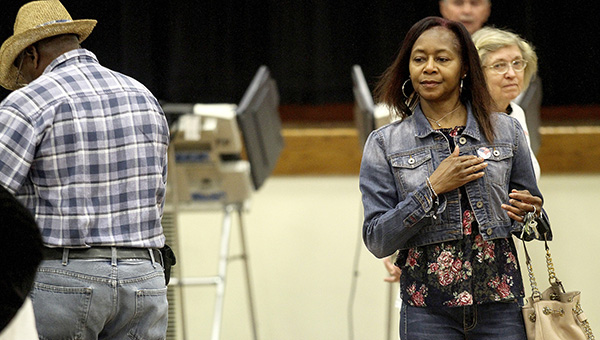 Katherine Webb sticks an ‘I Voted!’ sticker onto her jacket after voting in the primary municipal election last Tuesday at the Vicksburg City Auditorium. (Courtland Wells \ The Vicksburg Post)

The lack of a contested race for South Ward alderman and no Republican primary may have been the reason for a low voter turnout for Tuesday’s election, two incumbent elected officials said.

Flaggs defeated two challengers in the primary for Mayor, while Mayfield beat one. South Ward Alderman Willis Thompson was unopposed in the primary.

His opponent in the June 6 general election, Republican State Dist. 54 Rep. Alex Monsour was also unopposed, and is the only Republican candidate for city office.

Tuesday’s situation was similar to the city’s 2009 primary, when 3,108 voters, or 23 percent of the registered voters at the time, cast ballots. The only contested race was the Democratic primary for mayor. Mayfield and former South Ward Alderman Sid Beauman were both unopposed that year.

Both this year and 2009 are a stark contrast to the 2013 and 2005 primary elections, in which all three elected offices were contested.

The 2005 Democratic primary, in which 4,169 voters participated, featured contested races for mayor and North and South Ward alderman.

He added there was also confusion about two voting precincts in the city at the American Legion precinct “and some folks thought Travelers Rest (Baptist Church) was a city precinct and it’s not; it’s a county precinct. A lot of folks got discouraged about that.”

Mayfield believes the lack of a contested race in the South Ward may have affected the turnout in that area, “But I don’t think it affected (the turnout) citywide.”

“If you don’t have contested races citywide, you’re always going to have certain sections of the city where the people are nonchalant (about voting).”

Also, he said, the lack of a Republican primary also may have kept some voters home, affecting the turnout.

A breakdown of the vote by precinct compared with the number of registered voters in each district’s largest precincts indicated Flaggs’ and Mayfield’s opinions about the lack of a race in the south affecting the turnout may have merit.

At the Elks Lodge, the precinct’s second largest, 360 voters, or 23.4 percent of its 1,540 registered voters cast ballots.

The American Legion Post 3 precinct, the largest in the North Ward, had 641 voters, or 22.6 percent of the precincts 2,838 register voters, vote.

At the Vicksburg Auditorium, the North Ward’s second largest precinct, 380, or 26 percent, of the precinct’s 1,459 registered voters cast ballots.

Polls open at 7 a.m. on Tuesday, June 6 for the general election and close at 7 p.m. 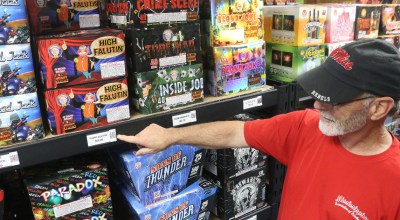