Breland in line to become Vicksburg’s next football coach 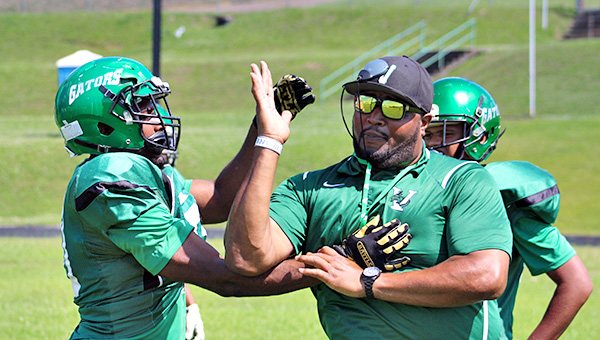 Vicksburg High coach Lorenzo Breland, right, demonstrates a technique to Darren Howard during practice on Monday. Breland has received a recommendation to be VHS’ next head coach, subject to approval by the Vicksburg Warren School District Board of Trustees at its meeting later this month. (Ernest Bowker/The Vicksburg Post)

For the first half of Vicksburg High’s football spring practice session, an air of uncertainty hung over the program.

After Marcus Rogers resigned in early April, who would the next coach be? Would they continue with the same schemes or start fresh? How much of the work they were doing might get flushed when the hire was made?

As they began their last week and the run up to the spring game, all of those concerns have vanished.

Assistant coach Lorenzo Breland, who has been serving as interim head coach during spring practice, is in line to earn a promotion and become the Gators’ full-time head coach.

Breland has received the recommendation of Vicksburg Warren School District athletic director Preston Nailor and incoming VHS principal Angela Johnson. His hire still requires a majority vote of approval from the VWSD Board of Trustees at its next meeting on May 25.

“It’s always been a dream to be a head coach. I think every coach wants to be a head coach and put their stamp on a program,” said Breland, who was the Gators’ running backs coach in 2016. “It hadn’t sunk in yet when we got through Friday. I took the weekend to take it in and it’s starting to sink in.”

Nailor had originally hoped to have a recommendation in time for a vote at last month’s school board meeting, but delayed it because he wanted Johnson to have some input on the decision. Johnson’s hire was approved at the board’s last meeting on April 27.

“We had some good applicants and wanted to give some of them second interviews. I wanted Ms. Johnson to be in on the interviews. Her input was vital on all of the decisions,” Nailor said.

This will be the first head coaching job for the 32-year-old Breland, but he’s spent his entire adult life working in football. He was an All-Southwestern Athletic Conference offensive lineman at Jackson State and part of its 2007 SWAC championship team, and then played in the Arena Football League for six seasons.

In 2014, while playing for the New Orleans VooDoo, he suffered a concussion whose lingering effects forced him to retire. He had been an assistant coach at Bailey Magnet and Murrah as his playing career wound down and came to Vicksburg when Rogers was hired in 2014.

When Rogers resigned following a DUI arrest on April 5, Breland assumed control of the team for the spring practice period that began two weeks later.

“It was a very tough decision, but I wanted to make sure we kept continuity with the program and the kids,” Nailor said. “We fell into an awkward situation and he’s been taking care of everything in the spring. We feel very confident in him and his ability to lead the kids.”

Nailor informed Breland of the decision late last week. Before then, Breland admitted, was a strange time within the program.

A new head coach might have brought with him a new staff of assistants and an entirely different philosophy. Until a final decision was made, it essentially left Breland and the other VHS assistants as lame ducks treading water during an important time of year.

“We addressed it as a staff. In an ideal situation you’d have a coaching change that happens over Christmas so you have time to get everything in place. Given the hand we were dealt, we didn’t know with the uncertainty how it would turn out,” Breland said. “We had to ask people to step outside of their comfort zone and coach some positions they weren’t used to. We slowed some things down and did some more board work and drills specific to the game. With all the outside distractions around, we wanted to keep it simple.”

Since the leadership position has been settled, Breland and the Gators have been able to turn their focus back toward football. Monday began the last week of spring practice.

The spring game will be followed by two months of workouts and 7-on-7 camps, a few weeks of preseason workouts, and then Breland’s head coaching debut in the Red Carpet Bowl Aug. 18 against Oxford.

The Gators will have 34 seniors on the roster, including most of a talented defense and starting quarterback Joe Johnson. Having such a veteran roster, Breland said, will help the team navigate its way through a difficult early stretch that includes three Class 6A playoff teams in the first three games.

Already, he said, it has helped them overcome plenty of off-the-field adversity surrounding the coaching change.

“The coaches and the kids did a great job overcoming that adversity,” Breland said. “Everybody bought in. Everybody’s still working hard. Now that it’s official, we can move forward and keep working.”