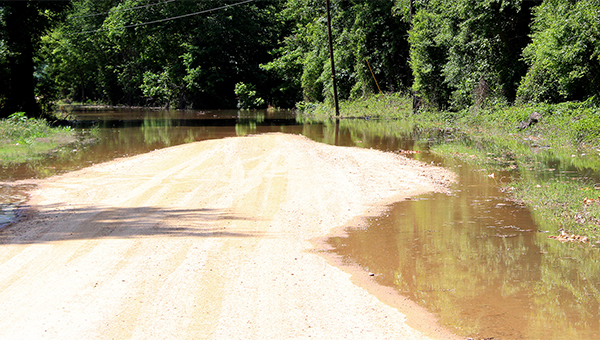 OVER THE ROAD: Water covers part of the unpaved section of Chickasaw Road west of North Washington Street. City and county officials are preparing for a project crest of 46 feet for the Mississippi River in Vicksburg on May 18.

The owner of Chotard Landing Resort, which is located on the riverside of the levee north of Eagle Lake, is well aware of what Old Man River can do when it gets out of its banks and spreads across the landscape.

The spring flood of 2011 covered his store, restaurant and washateria, and flooded the camps of weekenders who stay at the resort during the summer.

In January 2016, his property was again covered with water when the Mississippi crested at 50.23 feet at Vicksburg.

The predicted crest on May 18 of 46 feet will be bad for business, he said.

“Forty-six feet will put about a foot in my store and about 2 feet on my road coming in,” he said. “Anything less (smaller crest) than that would be appreciated. I just hope there are no more heavy storms and let this get on out of here. It (the water) won’t get any of the cabins or anything; the cabins are pretty elevated. It takes a pretty bad boy to get in there.”

Johnson, who’s been watching the river, said its rise seems to have slowed down some, and he would like to see the crest lowered a few feet.

Johnson isn’t the only person watching the river.

City, county and Corps of Engineers officials are keeping their eyes focused on the Mississippi River as they wait for the crest to pass by Vicksburg, where the flood stage is 43 feet.

And while that crest is more than a week away, Warren County Emergency Management director John Elfer said high water is already reaching some places.

“Zigler Road, Laney Camp Road, Chickasaw, Long Lake, all that’s underwater,” Elfer said. “The county barn has put up barricades on those roads that are blocked.”

“The crest on the 18th is probably going to be a long crest,” Raimondo said.

“It’s going to stay up for 10 days; that’s what we’re hearing from the (National) Weather Service. We had some rain fill in behind up north.”

Raimondo said Corps officials have been in contact with local levee boards in the district, and plan to do some levee patrols in the Vidalia, La., area looking for hot spots, potential problem areas identified during the 2011 and 2015 floods.

“We’re going to ride this thing through,” he said.

Vicksburg Mayor George Flaggs Jr. said city crews have installed a gate near the former access to the Grand Station Casino, and are keeping a 24-hour watch on the river at city’s waterfront.

“We have put up barricades on Long Lake Road,” he said.“Right now, we’ve done all we’re going to do,” he said. “I don’t think we’ll have any problems if the crest stays at 46 feet. We should be all right.”