Couple watches both Century plants bloom at the same time 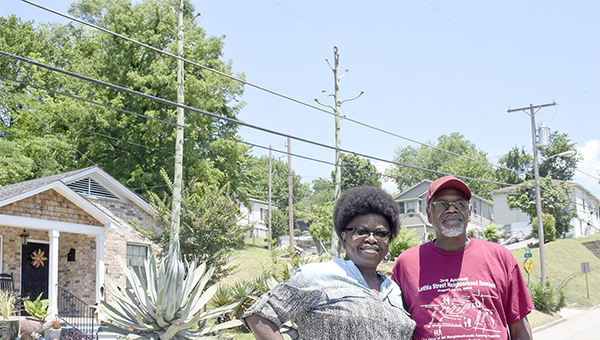 SKY HIGH: Isabelle and Willie Parsons pose for a portrait in front of their two Agave Americana, commonly referred to as Century Plants, that have sprouted upwards of 20 feet in the past two weeks Tuesday. Agave Americana’s typically grow a tall stalk at the end of their lifespan which can be between 10 to 30 years.

In the span of only a half an hour, four cars came to a stop in front of Isabelle Parsons’s house on East Avenue. They, like many others over the past two weeks, couldn’t help but stop and stare at the 25-foot-tall curiosities that have sprouted in Parsons’s front yard.

The soaring stalks are part of the blooming process for the two Agave Americanas, which are commonly referred to as century plants, Parsons planted twelve years ago.

“About two weeks ago, I walked out and it was about two or three feet tall,” Parsons said. “In two weeks, this happened. Every morning, I come out and say what have you done now God. This is the first plant in my life that I got more then I bargained for.”

She originally planted three of the plants, which she received from a coworker, when they were less than a foot tall. Over the years, the two remaining ones have grown into large plants that dominate her front yard.

“I never knew it was going to do this,” Parsons said. “We actually had another and I’m glad it fell off the hill. My husband had to take the truck and winch it away, because we wouldn’t have been able to get in the house.”

Much like the passersby who can’t help but stop, Parsons was surprised when the century plants started to sprout a towering stalk.

“I’m like everyone else really, because I didn’t know what they were,” Parsons said. “I never knew that we would have this monstrosity.

The Agave Americanas are native to Mexico, Texas, Arizona and New Mexico. They typically live between 10 and 30 years before blooming. The 25-foot-tall stalk grows branches that flowers bloom on the end of. After blooming, the plant will die, a day that Parsons and her husband Willie are anxiously awaiting.

“It is going to die, supposed to. I went on the internet, and it had the bloom standing up in air and all the leaves were drooped. I am waiting on it. We can’t wait.”

Agave Americanas have no set blooming cycle, which has created the added curiosity of the two in Parsons yard blooming at the same time.

“I’m not a green thumb, I like flowers, but I had no idea this was going to happen,” she said. “Traffic stopping, people stopping in front of the house. Some guys came by from Texas. They really enlightened me about them. They said they’ve never seen two bloom at the same time. It has been like an attraction.”

The bases of the plants are surrounded by young offshoots, but Parsons said “they gone too” after the original plants finish blooming.

“People have been asking for them, and I said let it do what it’s going to do and you can have them,” she said.