MDOT: Muddy Bayou Bridge could be finished by end of May 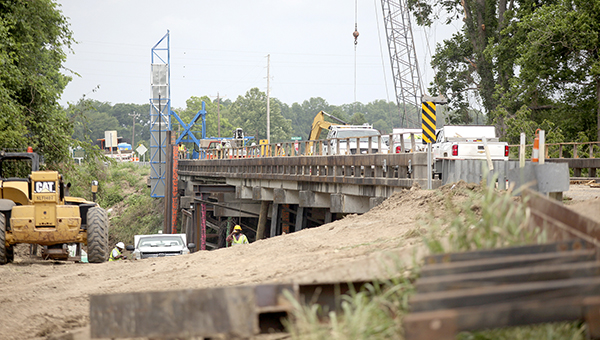 Workers continue repairs on the Muddy Bayou Bridge. The bridge was closed in late March due to discovered structural issues. (Courtland Wells | The Vicksburg Post)

The Muddy Bayou bridge on Mississippi 465 in Eagle Lake could be re-opened to traffic by either the end of May or the first part of June, the Mississippi Department of Transportation’s Central District engineer said.

The bridge was closed March 29 after an inspection by an MDOT bridge inspection team discovered severe decay in the bridge’s timber piles. The closure effectively split the Eagle Lake community in half. At the time, no deadline had been set when the span would be repaired.

“It looks really good,” he said Thursday after a visit to the site. “Frankly, I was a little surprised. I think they’ve made a little more progress and a little more work than I initially thought they did. They were driving piles while I was there. They had actually started some of the other things I didn’t think they were going to start until they had gotten all the piles driven.

“I’m hopeful that the weather holds out and the river doesn’t run us out; we can get this taken care of and get out of everybody’s hair.”

Magee said at the worst places on the bridge the contractor is supplementing the wood pilings with steel pilings that will take the load off the wooden pilings.

“We’re supplementing them (with other pilings) where they are basically carrying no load at all,” he said. “These are steel pilings, so deterioration is not going to be a problem with the repairs we are making. We really feel good that this will be the last repair necessary for this bridge until it ultimately gets replaced.”

A replacement, he said could be several years in the future, adding the state is just starting the process to replace it.