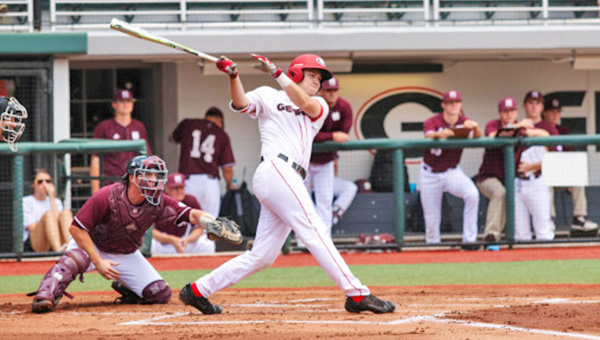 ATHENS, Ga. — First-place Mississippi State rolled into its series against a struggling Georgia squad with a chance to pad its lead in the Southeastern Conference standings.

In game one, at least, it took full advantage of the opportunity.

Brent Rooker and Elijah MacNamee both homered, Konnor Pilkington pitched eight scoreless innings, and Mississippi State won 9-3 Friday in the opener in the battle of the Bulldogs.

Mississippi State (33-17, 17-8 SEC) maintained its one-game lead over LSU in the SEC West and stayed tied with Florida for the overall lead in the conference.

“This was a big-time win for us,” Mississippi State coach Andy Cannizaro said. “Our guys came out ready to play. Sometimes, it is hard when you play a day game on a Friday. It doesn’t have the electric feel of a Friday night game in this league, but Konnor was outstanding on the mound and we had some timely hits.”

The start time of Friday’s game was moved from 6 p.m. to noon to avoid oncoming storms. Mississippi State still had plenty of thunder in its bats.

Cody Brown added a two-run triple in the seventh inning and scored on a wild pitch to give the visiting Bulldogs a 9-0 lead, and by then Pilkington was cruising.

After allowing hits in the first and second innings, Pilkington did not allow another hit until the eighth when back-to-back hits broke up a string of 13 straight retired batters.

Pilkington (6-4) gave way to the bullpen after the eighth, having given up four hits and four walks while striking out seven.

“They were just better than us, especially on the mound, and they had some critical bats to get guys on base,” Georgia coach Scott Stricklin said. “We had a chance at the beginning, we had guys on base and if it had turned out differently maybe we would have gotten them in the bullpen. That’s the key, getting their starters out of the game early.”

Rooker finished the game 2-for-3 with three RBIs and three runs scored for Mississippi State. Brown went 2-for-5 with two RBIs and two runs scored, and Jake Mangum had three hits.

Tucker Bradley had two hits and two RBIs for Georgia. He drove in both runs with a single in the ninth inning.