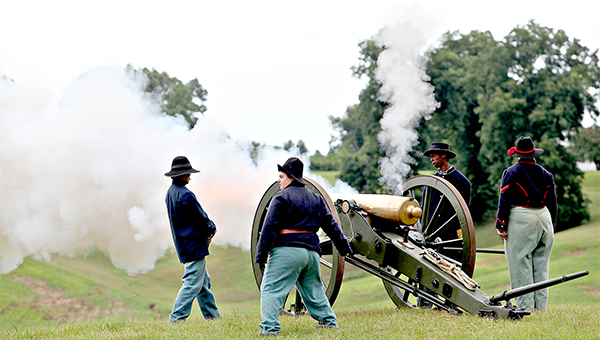 The Vicksburg National Military Park is looking for area students ages 16 and up who are interested in participating in the park’s Summer 2017 Living History Program.

For more than 40 years, area students have portrayed Union and Confederate soldiers and civilians to help tell visitors the story of the assaults and siege of 1863.

“We will hold living history programs on Graveyard Road, during the Fourth of July, at the Shirley House and the visitor center,” said ranger Lela White, the Living History coordinator. “We’re hoping the volunteers will be able to volunteer for all four weekends, but we understand that some people will not be able to. We may have some volunteers who will be interested in volunteering during other times of the year.”

She said the volunteers will be trained by park rangers in Civil War soldier’s and sailor’s skills to enable them to portray the day to day lives of these soldiers. The leaders for next year’s artillery and rifle programs will be picked from these volunteers, and Union and Confederate uniforms and equipment will be provided by the park.

The volunteers, she said, will not be allowed to fire weapons.

“I am not black powder certified,” White said, “so we will not be able to have training this year. We’re hoping some of the volunteers can get training to assist when they fire the cannons on the Fourth.”

Because no one is black power certified at the park, she said, an artillery unit from another national park will be firing the cannons July 4.

Whether the volunteers will be able to get training to assist with the gun will depend on the crew coming to fire the gun. Students interested in volunteering for the living history programs or who want more information can call White at 601-636-0583 ext. 2968 by May 19.

A meeting for all interested volunteers and parents will be held at the park’s maintenance training room May 20 from 9 to 10 a.m.

More than a 1,000 years of experience retires

Experience is one of the hardest things to replace. Now, the Vicksburg Warren School District will have to find a... read more