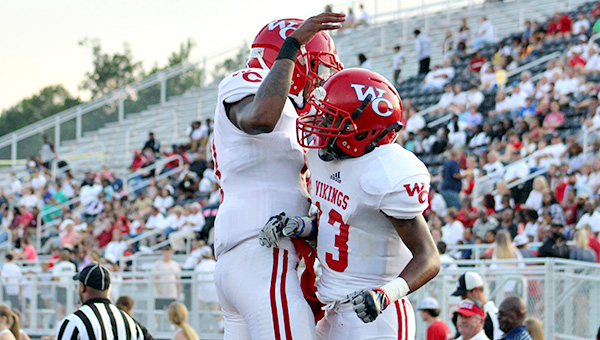 Warren Central quarterback F.J. Barnum, left, celebrates with receiver Jalen Allen after the two hooked up for a touchdown pass in their spring game against Brandon. Barnum also ran for two touchdowns as the Vikings won 34-33. (Ernest Bowker/The Vicksburg Post)

BRANDON — On a beautiful, warm spring evening in May, Warren Central and Brandon’s football teams put on a show that would have felt right in place in the chill of November or December.

Warren Central quarterback F.J. Barnum scored on a 1-yard keeper with 2:30 remaining in the fourht quarter, and the Vikings held on to beat Brandon 34-33 in a thrilling spring game that seemed more like the playoffs than a scrimmage.

Warren Central overcame an early 10-point deficit, blew an 11-point lead in a matter of minutes, and then rallied in the fourth quarter to pull out the victory.

“That felt like a playoff game. It was two really good teams, and we did some really good things on the field. We made some mistakes, but it was two teams going back and forth and looking pretty sharp doing it,” Warren Central coach Josh Morgan said. “I was glad to see us get that kind of experience. That’s a big plus for us.”

The format of the game allowed both teams to treat it like a regular game. The junior varsity squads ran 10 plays on offense and defense at either end of the field between quarters, leaving the 12-minute periods of the main game to the starters and first-line substitutes.

Both Barnum and Brandon quarterback Will Rogers played every snap, and they took turns leading their teams up and down the field.

Rogers was 21-of-31 passing for 290 yards and three touchdowns — two of them to Jonathan Mingo, who caught four passes for 113 yards.

Rogers threw a 35-yard TD pass to Mingo on the game’s opening drive as the Bulldogs jumped out to a 10-0 lead. Barnum ran for a 17-yard touchdown and threw a 4-yard TD pass to Jalen Allen as the Vikings answered with three straight touchdowns to go up 21-10.

“Probably the thing I was most impressed with was F.J. running our ballclub. He was looking at the play clock, he was managing the game so effectively, and he was very accurate,” Morgan said. “He missed some throws, but he was doing some good things of running our team and I was very, very happy to see him. I thought he played well and was very impressed with him.”

Brandon answered again by scoring 10 points in the last 1:36 of the first half — including a scintillating 60-yard catch and run by Mingo with eight seconds left — and retook the lead on the other side of halftime when Rogers hit Matt Stowers for a 15-yard TD to make it 27-21.

The blown lead, long touchdown just before the half, and two turnovers that led to Brandon’s rally provided some teachable moments for the Vikings, Morgan said.

“You take away that and we were really slick,” Morgan said. “So, yes, it’s some teaching points. There’s things where we could have helped ourselves with, like a couple of turnovers. We fumbled a punt, we fumbled a kickoff. The defense did a good job of standing up and handling adversity. All of those things are great teaching points and something you can’t really coach them on. You have to get through it, and we’ll be able to use it.”

After Brandon took the lead, the kickers moved into the spotlight. WC’s John William Madison kicked two field goals in the second half, while Brandon’s Scott Goodman had three in the game — including two from 47 and 48 yards.

A 23-yard field goal by Goodman with 7:15 remaining put the Bulldogs ahead 33-27, and the Vikings took over at their own 26-yard line following the ensuing kickoff.

After a 14-yard pass from Barnum to Colin Standish on the first play, the Vikings ran it nine consecutive times. The last was Barnum’s 1-yard keeper off the left side, and he trotted into the end zone untouched. Madison added the PAT to give the Vikings a 34-33 lead.

Brandon got the ball once more, but turned it over on downs near midfield. Kevius McDaniel sacked Rogers on third-and-5 to put the Bulldogs into a long yardage situation they weren’t able to convert.

“They’ve been winning. They’ve been winning in JV, and they were just ready for that moment when it came time to do it,” Morgan said. “Us putting that together, a touchdown drive and then a late stop, going through that experience, that is a big plus. Luckily we were able to learn from it, but also win the game.”

Warren Central finished with 256 rushing yards. Corey Wilson, Jr. led the team with 106 yards, including a 27-yard jaunt on the game-winning drive to move the ball into the red zone. Afernee Funches had 54 yards and a touchdown.

Defensively, the Vikings forced two turnovers and sacked Rogers three times. They also got an interception and held Brandon to a field goal after two special teams turnovers inside the 20.

Jalen Allen had the interception, and also caught a touchdown pass from Barnum on offense.

When it was all over, the Vikings left Brandon’s brand new stadium with more than just a spring victory. It was a confidence boost for a team that had 20 new starters on the field, and an indicator of what the character of the 2017 squad might be.

“It was good to see. We like to pride ourselves on our identity of being mentally tough and physically tough,” Morgan said. “That grit you’re talking about has got to be a staple in our program for us to be successful. A lot of times we’ve had to mold that into them, and really harp on it and work on it. These guys picked up on it and used it tonight to help them win the ballgame.”