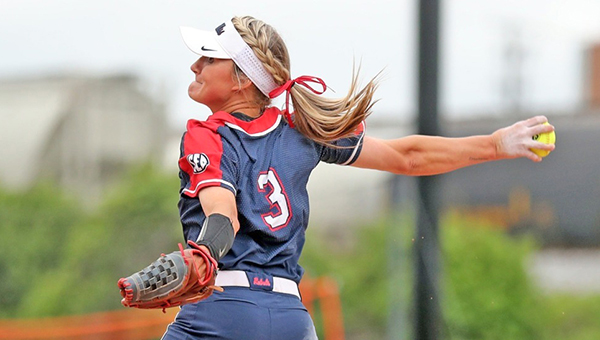 KNOXVILLE, Tenn. — Ole Miss came into the Southeastern Conference softball tournament as an afterthought, a No. 8 seed with no pedigree and seemingly little chance to make more than a cameo appearance.

But, as the saying goes, that’s why they play the games.

Ole Miss capped an improbable run to its first SEC title on Saturday, beating Alabama 4-1 in the semfinals in the morning and then LSU 5-1 in the championship game later in the evening.

The Rebels became the lowest-seeded team ever to win the tournament. It beat three top-25 teams along the way, including No. 1 Florida in the quarterfinals.

“Three years ago I came here and I had a goal and that was to be relevant in the SEC,” Ole Miss coach Mike Smith said. “We just won the SEC championship. It’s unbelievable. I want to go to Disneyland and Disney World. I’ve always wanted to say that.”

While the Rebels were in their first title game, LSU (41-18) was playing in its 12th, fighting for its sixth championship.

The effort unraveled in the fourth inning, when Ole Miss (40-18) scored four runs to take the lead for good.
Dakota Matiko hit a solo home run for Ole Miss, while Miranda Strother finished 2-for-3 with an RBI and a run scored. Paige McKinney also had two hits and scored a run.

Lee is the first championship-winning pitcher to throw every inning in the tournament since Alabama’s Kelsi Dunne did it across 19 innings and three games in 2010.

In the championship game against LSU, Lee allowed one run on five hits, and no walks. She walked one batter in the entire tournament, in the sixth inning of the Rebels’ semifinal win over Alabama.

The Rebels are already looking forward to the NCAA Tournament. They’ll await word on their destination — and if the tournament title was enough to earn the right to host a regional — when the bracket is unveiled Sunday.

The NCAA Tournament selection show will be televised at 9 p.m. on ESPN2.

“This team is full of firsts and I don’t think we’re done yet so I think we’re going to keep on keeping that on,” said Lee. “For now, we beat all the big shots. What is there to lose now?”