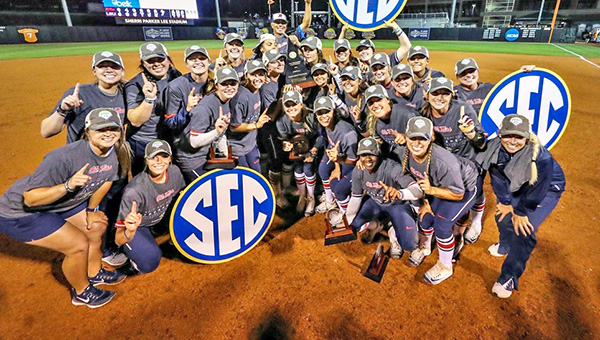 A day after they won the program’s first Southeastern Conference tournament championship, members of Ole Miss’ softball team were given a standing ovation when they showed up at Sunday’s baseball game against Texas A&M.

Later that night, the cheers grew even louder when it was announced the Rebels will stay at home for the first round of the NCAA tournament.

Ole Miss earned the No. 12 overall seed in the NCAA tournament and will host a regional in Oxford beginning Friday.

It’s the first time in the program’s history that it will host a regional. The 64-team bracket was released Sunday night.

“We’re in a Buffalo Wild Wings and we’re in a strip mall, and I think all the windows buckled along the other major department stores here. It was absolutely an eruption. We probably messed up somebody’s food order in the back,” Ole Miss coach Mike Smith, in an interview with the SEC Network, said in describing the scene when Ole Miss was announced as a regional host during the tournament selection show. “We probably had four or five hundred people here, and the elation of us being able to be a host, especially the 12-seed, it’s just so exciting in our program right now.”

Ole Miss is just 2-10 all-time against the three regional teams, with both wins coming against Southern Illinois. Ole Miss hasn’t played Southern Illinois since 2005, North Carolina since 2004, and Arizona State since 2015.

“I think we’ve got a really good regional, and we’re really excited. They’re great ballclubs. There’s a reason they’re one of the top 64 teams, and that’s because they can flat-out play softball,” Smith said.

The winner of this weekend’s regional will advance to the super regional round against the winner of the Los Angeles Regional, hosted by No. 5 overall seed UCLA.

Ole Miss, which entered the SEC Tournament as the No. 8 seed, was the lowest-seeded team ever to win the title. It won four games in a row, including an upset of No. 1 Florida in the quarterfinals.

Florida is the No. 1 overall seed in the NCAA tournament.

“They’re a special bunch. What they’ve been able to do the last two weeks of the season is beyond amazing. They’re a resilient bunch. These girls are exciting to watch. We were honored to be a host. The community of Oxford is excited, Rebel Nation is really excited. I think we’re going to come out in droves.”

Only nine teams qualified for the SEC Tournament, but all 13 of the league’s softball-playing schools advanced to the NCAA tournament. Seven of the 13 teams will host regionals.

It’s the first time a conference has sent all of its members to the NCAA tournament since the Pac-10 did it in 2007.

The list includes Mississippi State (36-20), which was eliminated in the first round of the SEC Tournament by Ole Miss.

Mississippi State will head west to Salt Lake City, Utah, to play in its regional. The Bulldogs will open against BYU (44-11) Thursday at 5 p.m. Regional host Utah (33-14) and Fordham (45-15) will play the other first-round game of the double-elimination regional at 7:30 p.m.

Mississippi State will make its 13th NCAA tournament appearance. All have come since 2000. MSU has won a regional game in its last three appearances, but has never reached the super regional round.

LSU, which lost to Ole Miss in the SEC Tournament championship game, will host a regional.

Other than LSU, all of the teams in the Baton Rouge regional won their respective conference championships.