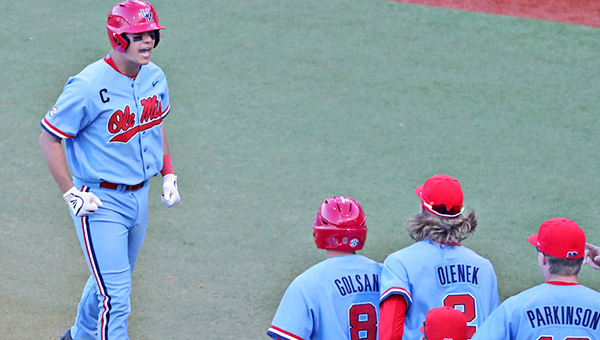 Ole Miss (31-21, 13-14 Southeastern Conference) won its third series in four weekends and finished with a 24-8 record at Swayze Field. It is a bubble team for the NCAA Tournament, and likely will not play again in Oxford this year unless it gets to host a super regional.

“It’s a very disappointing finish to the weekend. In the end we weren’t good enough in any area of the game to deserve to win,” Texas A&M coach Rob Childress said. “When you start the game by loading the bases and giving away two runs, it’s a tough hill to climb.”

Despite pulling out a win on Saturday, Ole Miss only led for one inning in the first two games of the series. That changed Sunday, when it went wire-to-wire with the lead.

A single and two walks loaded the bases with one out in the bottom of the first inning, and Ryan Olenek drove in the game’s first run with a sacrifice fly.

Another run scored when Colby Bortles hustled home while Nick Fortes was caught in a rundown between first and second. Bortles crossed the plate just before Fortes was tagged for the final out.

Texas A&M got a run back in the third inning on an RBI single by Logan Foster, but after that Ole Miss started to pull away.

Olenek scored on a squeeze bunt in the fourth inning to make it 3-1. In the eighth, Blackman hit a solo home run and Bortles a two-run shot to push the lead to 6-1.

Texas A&M scored twice in the ninth to get within 6-3, but never brought the tying run to the plate. Jorge Gutierrez led off with a home run, and Nick Choruby drove in the final run with a two-out single.

Ole Miss closer Dallas Woolfolk struck out Foster to end the game and earn his 12th save of the season.

Parkinson (6-3) got the win. He allowed five hits and three walks, but only one run, in six innings. He had five strikeouts.

Will Golsan led the Rebels’ offense by going 3-for-4 with a double and two runs scored. Olenek also was 3-for-4 with an RBI and a run scored.

Ole Miss will finish the regular season with four straight road games. It will play at Arkansas State on Tuesday night, and then at Auburn in a three-game SEC series beginning Thursday.