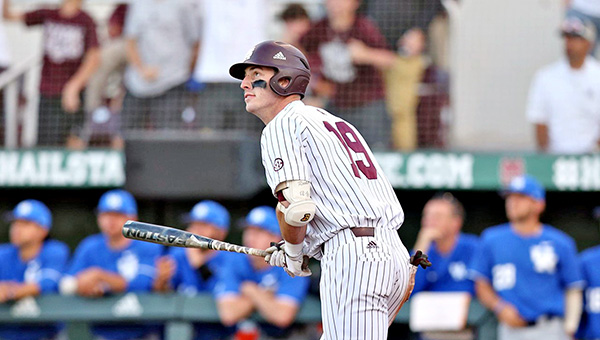 Mississippi State first baseman Brent Rooker was one of five finalists named Monday for the C Spire Ferriss Trophy. The award will be presented at the Mississippi Sports Hall of Fame and Museum in Jackson on May 22. (Kelly Price/Mississippi State Athletics)

JACKSON (AP) — Throughout the 2017 college baseball season, Mississippi State first baseman Brent Rooker has been among the national leaders in nearly every significant offensive category.

Rooker was named Monday as one of five finalists for the C Spire Ferriss Trophy, given annually to the top college baseball player in Mississippi.

He was joined on the list by Delta State’s Zack Shannon and Southern Miss’ Taylor Braley, Matt Wallner and Dylan Burdeaux.

The award, which is presented by the Mississippi Sports Hall of Fame and Museum, will be announced at a luncheon at the MSHOF on May 22. The award is sponsored by C Spire Wireless.

Rooker is hitting .400 with an SEC-leading 20 homers so far this season for the Bulldogs.

His home run total ranks in the top five nationally. He also leads the SEC in batting average, RBIs, doubles, slugging percentage, on base percentage and total bases, and has been named SEC Player of the Week three times.

Rooker is trying to become the fourth Mississippi State player in six seasons to win the Ferriss Trophy. His teammate Jake Mangum won it in 2016.

Shannon’s .415 batting average and 18 homers have helped the Statesmen be one of the best teams in Division II this season.

Shannon leads the Gulf South Conference in batting average, RBIs (88), home runs and five other offensive categories. He also leads Division II in RBIs and was named the GSC Player of the Year.

Braley, Wallner and Burdeaux are all important pieces of a Golden Eagles’ lineup that’s scoring more than eight runs per game and has led the team to the Conference USA regular season championship.

The freshman Wallner has a .330 average with a team-best 15 homers and 49 RBIs. His home run total is the most ever by a Southern Miss freshman and his RBI total is just four shy of tying the school’s freshman record.
Wallner’s home run total ranks second in Conference USA, while his slugging percentage (.659) ranks second.

He also has registered a 2-0 pitching record with a 1.84 ERA and three saves in eight relief appearances.
Burdeaux, a senior, is in the top 10 in at least seven different categories at the school for his career. He holds a season batting average of .352 with a team-best 19 doubles, nine home runs and a C-USA high 60 RBIs. The only player to start in every game for the Golden Eagles also leads the country in hits with 86.

Fans can vote for their favorite player online at csopavoting.com until May 20 at noon. The fan voting will account for 10 percent of the overall vote, with the other 90 percent being determined by MLB scouts and college baseball coaches in Mississippi.