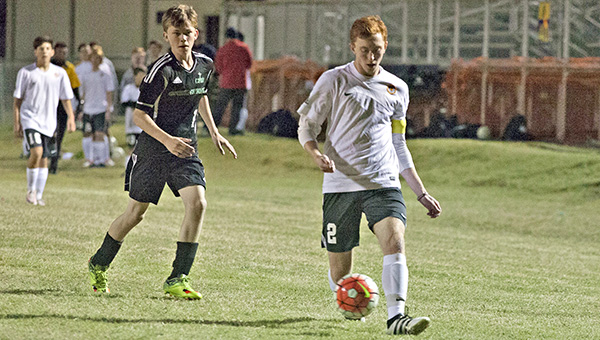 St. Aloysius’ Gradon Bourne (2) dribbles the ball up the field against Cathedral last season. Bourne scored 40 goals and assisted on 37 over the past two seasons. (Ernest Bowker/The Vicksburg Post)

In the long, occasionally storied history of St. Aloysius’ boys’ soccer program, there haven’t been a lot of players that have gone on to play in college.

The short list, however, now has another name on it.

Midfielder Gradon Bourne signed with Meridian Community College in January and celebrated the achievement with a ceremony Thursday in St. Al’s library. He’s believed to be the first boys’ soccer player from the school to sign with a junior college or four-year school since Adam Thornton went to Memphis in 2009.

“It makes me feel good. It feels good to know that I’m one of the better ones from Vicksburg and get to go to the next level,” Bourne said.

Bourne emerged as a superstar for St. Al this season, but got a couple of college offers as early as his junior year. He picked Meridian over Northwest Mississippi Community College.

In the 2016-17 season, he totaled 22 goals and 24 assists, earned All-District 3-AAA and All-County honors, and played in the MAIS All-Star Game.

Bourne had 16 goals and 13 assists in his junior season.

“I was sending out emails to college coaches when I was playing tournament ball and (Meridian) responded,” Bourne said. “It’s a good place to go if I want to get to the next level.”

Meridian was once a national power in men’s soccer in the late 1990s and early 2000s. It won the 2000 NJCAA Division I national championship and finished third the following year. Recent years have not been as good, but the Eagles did go 9-7 last year and seem to be trending upward.

The tradition and trajectory appealed to Bourne when he was making his decision.

“They went to the playoffs last year and beat Hinds, which won the state championship,” he said. “I feel like I’m part of something that matters. It’s a good program.”

Bourne said Meridian’s coaches also promised him a chance to compete for playing time as a freshman. He’ll play the same position as in high school, center attacking midfielder.

“That’s what I played the last two seasons,” Bourne said. “He said I’ll play some and be a good fit, but I’ll have to earn a starting spot.”

All in all, Bourne said, he’s just happy to have a chance to keep playing the game he loves at a high level.