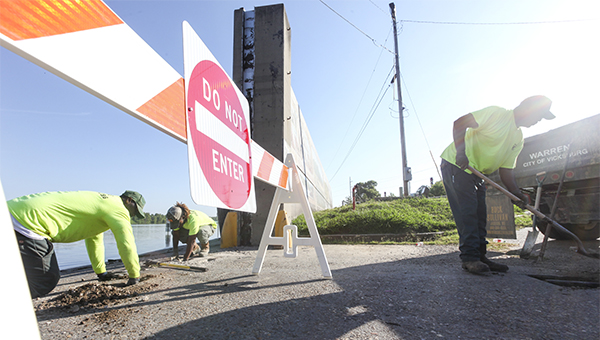 DeWayne Douglas, left, Anfernee Raider and Patrick Thomas with the Vicksburg Sewer Department prepare the area around the flood wall on Levee street to be blocked off because of rising water level of the Yazoo river Tuesday.(Courtland Wells/The Vicksburg Post)

The National Weather Service has raised the Mississippi River’s crest at Vicksburg from 46.5 feet to 48 feet, a change that is forcing the Mississippi Department of Transportation to close Mississippi 465, the direct Route to the Eagle Lake community.

“We anticipate closing it sometime after noon,” he said. “We will try to keep it open as long as we possibly can.”

Warren County Emergency Management director John Elfer said the top of the backwater levees north of Eagle Lake will be open to local traffic and light vehicles only to give Eagle Lake residents an outlet.

Hydrologist Marty Pope at the National Weather Service Office in Jackson said the cause for the revision was an unexpected 1.5- to 2-inch rainfall last weekend in the Arkansas and White River basins that put extra water into the streams, which flow into the Mississippi.

He said the present forecast calls for the crest to stay for several days.

At this time, he said the crest is not supposed to get any higher unless another rain system to the west enters the area sooner than expected.

“We’re going to be watching it,” he said.

The high water has forced city officials to take steps to begin closing the gate in the floodwall at Clay Street.

The China Street gate, however, will remain open.

The water has also flooded some roads in the city, covering Williams Road at Pittman Road, Browns Alley at Pittman Road and Ford Road. Three other roads, Long Lake Road, Chickasaw Road and Ziegler Road, have been underwater since last week.

“We’re asking people to slow down, obey the traffic signals and be careful,” Elfer said.