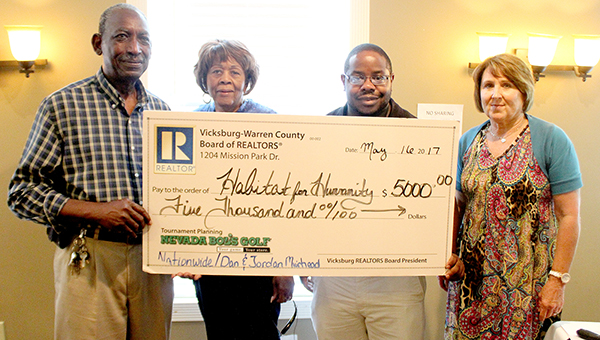 The Vicksburg-Warren County Board of Realtors Tuesday presented a $5,000 check to Habitat for Humanity to build and repair homes. Pictured with the check are, from left, are Habitat director Abraham Green, Board of Realtors board members Mary Barnes and William Nettle, and past president Sybil Carraway. Green said the money will be used on two homes under construction on Roosevelt Street. (John Surratt | The Vicksburg Post)

Realtors give huge gift to Habitat

Warren County Habitat for Humanity is richer thanks to the Vicksburg-Warren County Board of Realtors and area golfers.

The Realtors Tuesday presented Habitat with a $5,000 check raised through the proceeds from the Board of Realtors’ golf tournament, which is its annual fundraiser.

Jillean Bishop, Vicksburg-Warren County Board of Realtors executive, said Habitat was selected because of its work in building and repairing homes.

“We have been giving Habitat a $5,000 check each year for four years,” she said. “Community is one of the core values for Realtors. Habitat helps the community by repairing and building homes for people.

“We have these old, dilapidated homes and they take them, repair them or build homes for people live in, and that’s very important for our community.”

Abraham Green, Warren County Habitat for Humanity director, said having a benefactor like the Board of Realtors is a plus.

“I feel good about it,” he said. “It shows people do care about low to moderate income families being able to have affordable housing.”

He said the money in the past has been used to renovate homes, but this year’s donation will be used to complete two homes Habitat is building on Roosevelt Street in Marcus Bottom.

Habitat has been in Warren County since 1991, he said, since then it has helped 26 families in the area. He said the organization uses volunteers and gets donations of building materials, and time from craftsmen like plumbers, electricians and carpenters.

Habitat sells the homes to the homeowner at cost through a 20-year mortgage. Green said Habitat helps the potential buyers work through the financing.

“It helps people to have a home,” he said. “It’s a very good feeling to be able to go someplace and know it’s yours.”

Lake Fest party is still on