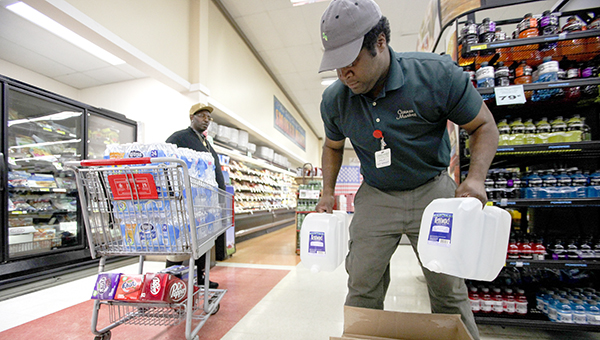 Additional water being shipped in to stores

Grocery stores throughout Vicksburg immediately saw a run on bottled water after it was announced Wednesday a water line had broken leaving the city without water.

Kroger, Walmart and Corner Market all quickly sold out of water following the news.

“I have zero on hand at the moment,” Walmart manager Oscar Pearson said Wednesday afternoon.

Johnny Lewis, with Kroger, said Wednesday “We have a few bottles, but not enough to brag about. We are pretty much wiped out. Soon as it came across they were buying it left and right”

A County Market representative said they had some water remaining Wednesday afternoon and were expecinting more Thursday.

Piggly Wiggly storeowner James Morgan said they had water on hand and could run to their store in Tallulah if needed.

“We can’t keep it in,” Morgan said Wednesday. “I’ve got 26 pallets coming [Thursday]. We probably have eight to 10 pallets on hand and we went across the river to Tallulah, our other store, for two pallets. We couldn’t get them off the truck. They bought them before we got them off the pick-up truck.”

Kroger, Walmart and Corner Market are working to have additional water brought in to meet the demand, but are unsure when it will arrive due to delays in the shipment.

Part of those deliveries were hampered Wednesday due to a severe accident on Interstate 20.

“I have 20 pallets of Dasani coming from Jackson, but unfortunately it got delayed due to the I-20 westbound lane being shutdown,” Pearson said Wednesday as demand grew. “We’ve got that on the way. We are going to continue to work with Coca-Cola and Pepsi to get more in here as possible.”

The westbound lanes were shut down thanks to a wreck Wednesday morning involving an 18-wheeler and a cement truck.

Debbie Shiers the front-end manager at Corner Market said they will receive more water Thursday and another shipment will arrive on the truck Friday.

Lewis said they have a call into Memphis for a water shipment, but they are unsure when it will be shipped out.

Vicksburg Police Chief Walter Armstrong said police and sheriff’s deputies will deliver water to elderly and homebound residents, who are unable to go to the distribution site on Pemberton Boulevard.

The city of Vicksburg is working to recover from a major water disaster when the 36-inch main line, leaving the... read more