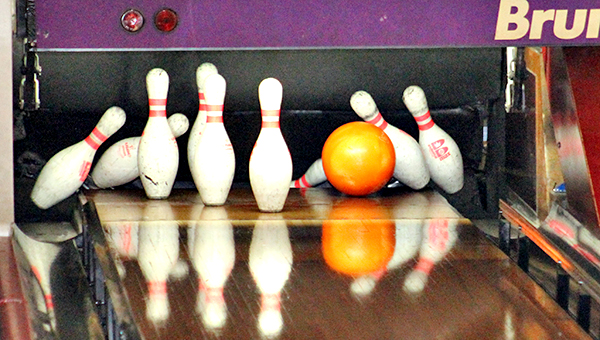 A bowling ball hits the pins at Indian Lanes in Clinton. Warren Central and Vicksburg High will both add bowling as a varsity sport in 2017. (Ernest Bowker/The Vicksburg Post)

Bowling was approved as an addition to the varsity sports lineup at Warren Central and Vicksburg High at the last meeting of the Vicksburg Warren School District Board of Trustees in April. It’s the 15th sport that will be offered at the two schools, and the second in three years after archery was added in 2015.

The only sport sanctioned by the Mississippi High School Activities Association that is not offered by Warren Central and Vicksburg is wrestling.

VWSD athletic director Preston Nailor said bowling will provide an avenue into athletics for students who might not participate in more physical activities.

“A lot of people don’t know that that is a sanctioned activity. We’re 45 minutes away from a number of schools that offer it, so we have some teams close by that we can play,” Nailor said. “Not only are we adding new sports, but we’re bringing in kids that might not otherwise play sports.”

Bowling is a winter sport on the Mississippi High School Activities Association calendar, with practice starting in mid-October and the first matches in early November. The next five months, however, will be a busy time for the start-up programs at Warren Central and Vicksburg.

Nailor said several organizational meetings will be held this month to gauge interest, and he hopes to have coaches in place by the end of May.

There are also a number of logistical challenges to sort through. A new bowling alley is being constructed in the Vicksburg Mall on Pemberton Blvd., but will not open until later in the year. It’s expected to eventually serve as the home alley for both Warren County teams, but until it’s ready they’ll likely practice and play at Indian Lanes in Clinton.

MHSAA bowling teams are allowed to play up to 12 matches per season, or about one per week. The state tournament is scheduled for Feb. 14-16, 2018.

“We’ll probably be on the road for most of the season,” Nailor said. “Depending on the timeframe for the bowling alley being completed, we’ll probably try to host one match for each school.”

Another minor hurdle is that bowling is being added after the MHSAA released its latest realignment plan. The two Warren County schools will have to submit a request to the state association to participate.

“We’re a little bit behind the gun at this point,” Nailor said.

Putting bowling on the school district’s sports menu serves both a noble and practical purpose, Nailor said. His goal since being hired in 2016 has been to have the Warren County schools win all-sports awards from the MHSAA that are based on across the board performance.

Adding more sports and getting more students involved goes a long way toward that goal, while also getting more children active and involved in school programs.

“Most kids shy away from athletics. You think of people that have to be toned up, and the fastest and the quickest. There are so many spectrums of athletics now that anybody can do it,” Nailor said. “Adding these sports like bowling and archery, where any kids can do it, is adding to my vision of winning an all sports award for our district.”