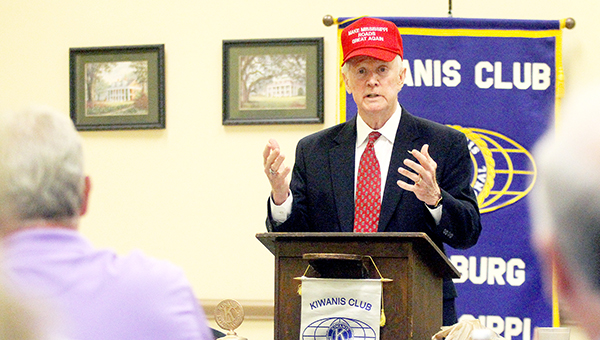 At the weekly meeting of the Vicksburg Kiwanis Club Tuesday, Mississippi Transportation Commission Chairman and Vicksburg native Dick Hall discussed the need for additional funding for the state’s highways and bridges.

“You own over 20,000 lane miles of state highway that need repairs or replacing,” Hall said. “You own 977 deficient bridges that need serious repair or possible replacement. The cost to make those highways repairs is over $1 billion and to fix the 977 bridges will cost in excess of $2.5 billion. We don’t have the money to do that.”

Hall was a member of the State legislator in 1987 when the initial bill was passed to raise the fuel tax to fund the construction of Mississippi’s highway system. The issue, Hall said, is that the funding has not been increased in the 30 years since although the costs of materials have gone up 462 percent.

“You tell me of a business that you can successfully run where your revenue level was set 30 years ago and the cost of your materials has gone up 460, something percent,” Hall said. “What it is going to take to convince the legislators and the governor of that I’m not sure, because it is an economic issue. It is a convenience issue. It is a safety issue. To some unfortunately, it is just a political issue.”

Hall said that some legislators have suggested using tax revenue from online sales to help fund highway improvements, but “nobody even knows how much it is, let alone how stable.” He added he is opposed to the idea of putting potential lottery funds directly into the transportation fund, and that they should go into the state’s general fund.

Hall’s proposal is to follow the lead of South Carolina, Arkansas, Tennessee, Alabama and Louisiana and raise the fuel tax from its current level of 18.4 cents. He said that South Carolina recently passed a two-cent increase for each of the next six years and eight states in all have raised their fuel tax this year

Each cent added to the current fuel tax would raise an additional $20.2 million per year Hall said. He added that the estimation is that by the time South Carolina’s plan is fully in place including the full tax increase and additional funding built, they will raise $600 million a year. Mississippi needs $300-400 million a year to “get it back into the shape it was in” Hall said.

“The part that gets me is when the Legislature wants to question the efficiency of the Mississippi Department of Transportation,” Hall said. “I can take that kind of question and criticism from a successful businessperson, but I was a member of that Legislature 24 years and there ain’t anywhere more inefficient than the Mississippi Legislature unless it is the U.S. Congress.”

Hall said that there are only three states that currently have a lower fuel tax than Mississippi, which helped contribute to Jackson having the lowest gas prices in the country during the first week of May.

Realtors give huge gift to Habitat

Warren County Habitat for Humanity is richer thanks to the Vicksburg-Warren County Board of Realtors and area golfers. The Realtors... read more