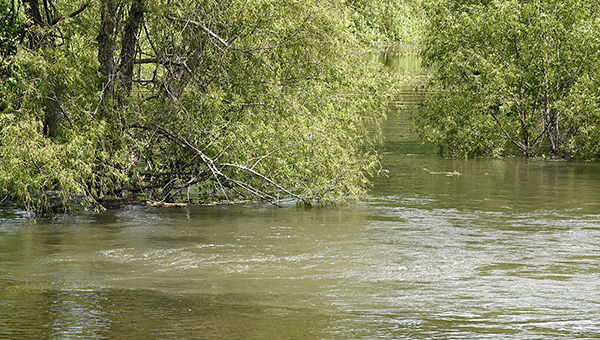 Bubbles appear from under the water where a suspected water main break is located. The main leads out from the city's water treatment facility. (Courtland Wells | The Vicksburg Post)

The city of Vicksburg is working to recover from a major water disaster when the 36-inch main line, leaving the water treatment facility on Haining Road ruptured.

To make it worse, the rupture is currently underwater.

Vicksburg Mayor George Flaggs Jr. said the rupture is in an area covered by floodwaters from the Yazoo Diversion Canal.

The break in the line has shut off water service to the city’s 10,000 customers and to the Yokena-Jeff Davis Water District, which gets all of its water — 200,000 gallons a day for its 2,000 customers — from the city.

“We’re going to fill up our tanks and go for as long as we can hold out,” district operator Wayne Muirhead said. “We’ve notified the (state) Health Department, and I’m going to post notices on Highway 61 in several places and we’re going to email the customers we have email addresses for.”

The Board of Mayor and Aldermen are expected to call a special meeting Thursday to declare an emergency to make repairs to a 36-inch main waterline that ruptured Wednesday morning in the city’s well field off the port road.

An emergency declaration will allow the city to go around the state’s bid law to hire a contractor to fix the problem without having to wait on the bid process.

Officials at the Vicksburg-Warren School District have announced the early dismissal of some schools in the area affected by the water emergency.

Students at Bowmar and Warreneton elementary schools , as well as students at Tiger Academy dismissed at 12:15 p.m.

All other schools within the district will dismiss at normal times.

In addition to some schools and government office closures, the water emergency has led to a number of restaurants closing.

But, Gerad Hardy, general at Ameristar, said the casino is “open for business.”

We have set up alternate restrooms and are serving bottled water and canned sodas on the casino floor,” Hardy said. “And, we are going to have at least one restaurant open with a limited menu.”

Hardy said the casino has plans regardless of the length of the water emergency.

“We are in a position to handle either a short-term or long-term outage,” he said.

As for the hotel, Hardy simply said they would continue to “meet health code requirements.”

Officials at Riverwalk, Lady Luck and Waterview casinos were unavailable for comment.