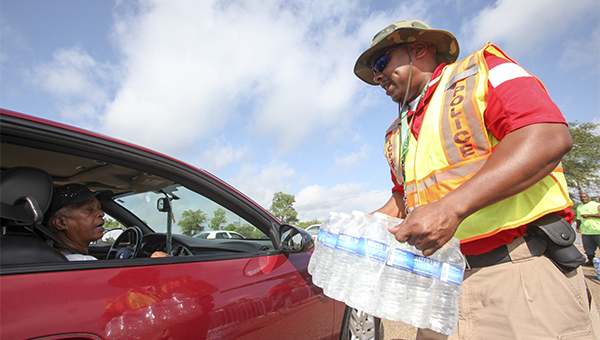 A Vicksburg Police officer distributes water to a Vicksburg resident during the Water Distribution at the Vicksburg Mall Thursday. Vicksburg is nearing 24 hours without water due to a main break Wednesday morning. (Courtland Wells/The Vicksburg Post)

Employees for Hemphill Construction worked through the night moving dirt in an effort to provide sufficient material to start building a dam to block floodwaters and clear the site of a leaking underground main waterline that has left the city of Vicksburg dry.

The problem could leave the city without water for five days or longer for Vicksburg’s 12,000 water customers, Mayor George Flaggs Jr. said Wednesday.

Speaking at a press conference Wednesday afternoon at the city’s water treatment plant on Haining Road, Flaggs said the Board of Mayor and Aldermen have declared an emergency “because we have absolutely no water anywhere in Vicksburg. So if you get your water supply from the city of Vicksburg, you will have no water.

“There’s no reason to boil, because we have no water.”

He said the board was to meet Thursday at 10 a.m. to make the emergency declaration official.

Flaggs said the leak in the 36-inch line was discovered about 11 a.m. Wednesday when officials noticed water pressure was declining, and city employees found the issue was coming from a line buried 10 to 12 feet underground. He would not speculate what caused the leak.

“In about 45 minutes, we dropped from about 150 psi (pounds per square inch) to 50 psi and the city workers found it, so basically all the water plant was doing was pumping water into the floodwater,” ESG project manager Eddie Busby said. ESG operates the water plant under contract to the city.

Once the leak was discovered, he said, plant employees shut off the main valve to prevent contaminants from coming back into the plant and stopped the flow of water.

Flaggs said the underground line is surrounded “by backflow water from the Mississippi River, so what we have to do is to build a dam, then we have to go in and go down about 12 feet and try to identify the leak and fix it.”

At best, he said, a conservative estimate is five days before water service could be restored.

“There’s absolutely no way we’re going to be able to have water back until the weekend,” he said.

“It will take us about 48 hours to build a dam, if we’re lucky, and the rest of the time to get in there. Hopefully we will have the great weather that we’ve got today.

“I don’t know if anybody would have been able to predict this would have happened today, particularly with a river that’s back flowed.”

Hemphill is optimistic about being able to make the repairs.

“They believe they can fix it as soon as they clear the water and get in,” Flaggs said.

He added that crews would be working around the clock to build the dam, which he said will require 16,000 to 20,000 cubic feet of dirt “that’s got to be moved over there, and then we’ve got to pump the water out to get to the site.”

Public works director Garnet Van Norman said officials believe the break in the line is where it makes a transition from a 36-inch line to a 30-inch line. He said the city was ordering 30-inch and 36-inch pipe for the repairs. He said building the dam will be the longest part of the repair, “And how long it will take is anybody’s guess, but we’ve started on it now.”

Once the line is repaired, the plant will be put back online and it will take approximately 24 hours before pressure is fully restored, he said. The city will also issue a boil water notice, which will remain in effect for an estimated two days after pressure is fully returned to the system.

Police Chief Walter Armstrong said officers will be on duty directing traffic on Haining Road on either side of the break during the repairs.

Because of the construction, Armstrong said, he was asking people who do not have business at any of the industries or businesses at the Port of Vicksburg to stay away from the area until it is re-opened.

“We’re asking the motoring public to help us keep this particular area free of no more traffic than we have to have,” he said. He said police will also find parking spaces for people with business in the area, and he has cancelled all officers’ leaves until the crisis with the waterline and the flood ends.

Additional water being shipped in to stores