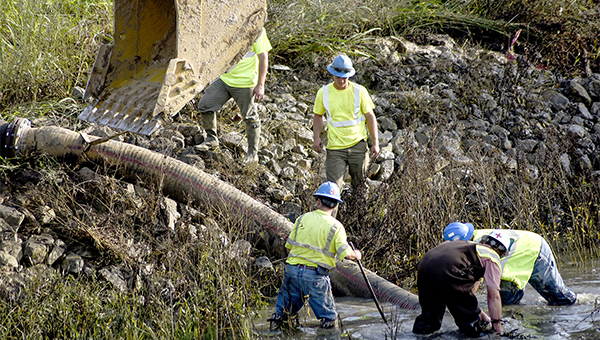 Crews work to reposition piping being used to pump out water between the dam and bank around the water main break that occurred in May 2017 leaving Vicksburg without water for a few days. (Courtland Wells/The Vicksburg Post)

After 30 hours of work, crews completed construction of a makeshift, earthen dam that now surrounds an area city officials believe lies the cause of the Vicksburg’s citywide water outage.

The dam was built to give workers and equipment access to a broken 36-inch main waterline that ruptured Wednesday, forcing city officials to shut down the city’s water treatment plant and cutting off the city’s water supply.

With the dam complete, crews can now begin pumping out about an acre of flood water, nearly 10 feet deep, that covers the area of the expected break. According to city public works director Garnet Van Norman, the water main is then 6-to-8 feet below ground in the city’s well field.

But, when pumping began late Thursday, crews discovered a possible breach in a 76-inch drainage culvert near the new dam that was beleived to be properly blocked.

It was reportedly fixed early Friday morning. Also, what began with three, large pumps removing water from the area, has been reduced to just one as the water levels goes down.

Flaggs continues to stand by his prediction repairs will be completed within five days, but indicated the repairs could be made sooner, because work at the site of the break was moving a head of schedule.

Vicksburg has been without water since the break in the line was discovered about 11 a.m. Wednesday, forcing workers at the city’s water treatment plant on Haining Road to close the main valve at the plant to prevent backflow into the water system, and cutting off the city’s water supply to the system’s 12,000 customers, including 2,000 in the Yokena/Jeff Davis Water District.

The city is expected to be without water at least through the weekend.

Flaggs said workers for several contractors worked “around the clock” to get the dam built.

Van Norman said the affected line runs parallel to Haining Road, and the dam was built built between Long Lake and Haining roads.

Once workers are able to access to the line, Van Norman said, they will have to remove all the dirt from around the line to make the repairs.

Other businesses are providing water, he said.

“We’re ordering everything we can,” Van Norman said. “We have to do that, because we don’t know what (damage) we have.”

Flaggs said Thursday afternoon he asked engineers from the U.S. Army Corps of Engineers Vicksburg District for advice and to evaluate the dam.

“We’re going to provide any technical assistance we can; we’re not going to change anything,” said district public affairs director Greg Raimondo. “These guys appear to have a good plan, but since you’ve got geotech capability available in town, it’s always good to have another set of eyes, and this is what we do.

“It looks like the mayor and his folks have got it in hand, but we’ll put a second set of eyes on it.”

“We’re asking the employees to work weekends until we can get the water back to normal,” he said.

The water situation, Flaggs said, “Has been frustrating to a lot of people. Particularly business owners, residents, nursing homes (and) hospitals. That is understood, but the city of Vicksburg and everybody is doing all they can under the circumstances.”