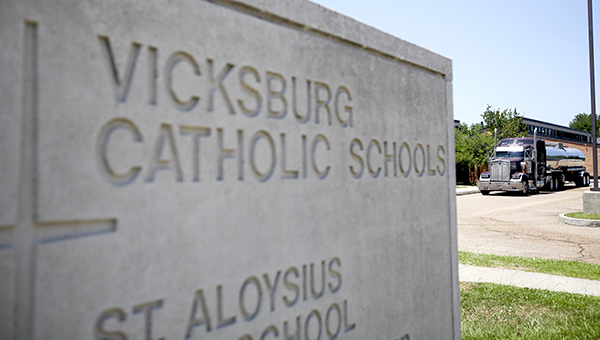 A tanker of water sits in front of Vicksburg Catholic Schools Thursday being used to pump water into the schools following the water outage in Vicksburg. (Courtland Wells | The Vicksburg Post)

While dozens of businesses and schools have closed to wait out the Great Vicksburg Water Outage of 2017, Vicksburg Catholic School got some help from its version of the A-Team to stay open.

On Wednesday, in the hours after a water main break left Vicksburg high and dry, a group of a half-dozen parents and local officials rigged up a giant pump system to keep the school’s sanitation system functional. Powered by a towboat pump and two large water tankers, it’s part engineering project, part MacGyver episode, and part community service project.

“It is unbelievable that we have that many talented people who have the resources to make it happen,” VCS principal Buddy Strickland said. “There’s no price tag you can put on it. We are ever so grateful for their expertise.”

The system works by replacing the city’s water supply with water from two large tanks. An 18-wheeler with a 10,000-gallon tanker trailer is providing water for St. Francis Elementary School, and a smaller 1,000-gallon tank is doing the same at St. Aloysius High School.

The water lines to and from the school were pressurized, which allowed both schools to operate their sanitation systems normally.

Patrick Smith, one of the parents of students who worked on the project, said the hardest part was finding a line into the school big enough to pump the volume of water needed to keep it all pressurized.

“It’s like a holding tank on an RV or large boat. You have a holding tank of water, and the lines are pressurized. You just have to have a large enough pump to create pressure,” Smith said. Smith and his brother J.O. own Big River Shipbuilding as well as Yazoo River Towing and Smith Towing. “We have a can-do background. We operate towing vessels, so all of the functions that go into this are things we do every day in our business.”

The water being pumped into the school is not suitable for drinking. It is strictly a temporary measure intended to make restrooms and sanitation facilities functional so students can get through the final week of school.

Final exams at St. Al begin Tuesday, and the last day of school is Friday.

“They can wash hands and dishes and use the toilets. They just can’t drink it,” Smith said. “For drinking water you need to do a lot of filtering and other things.”

Besides the Smiths, other parents pitched in resources, time and expertise.

Scooter Madison, who owns a trucking company, loaned the tanker truck. Kirby Field, and John and Logan Peay, provided knowledge and labor to get it all running. They worked until nearly 1 a.m. Thursday and then checked back throughout the day to make sure it was all operating smoothly.

A number of local officials and agencies also helped. The Culkin, Eagle Lake and Bovina Water Districts donated water to fill the tanker. The city of Vicksburg turned off its water valves to the school to pressurize the system and allow it to function off the temporary supply.

“All those guys knew what we were doing and who we were trying to do it for, and were happy to accommodate us,” Smith said. “There were multiple people that came together to make this happen.”