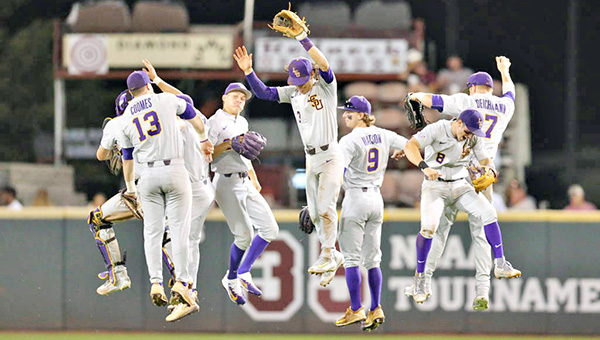 LSU players celebrate after beating Mississippi State 3-1 on Thursday. The victory assured the Tigers of at least a share of the SEC West Division championship. (Kelly Price/Mississippi State Athletics)

STARKVILLE — How was the West won?

It might just have been by a dominating performance from one of college baseball’s best pitchers.

“It was a tremendous victory for the Tigers tonight,” LSU coach Paul Mainieri said.

And a brutal loss for the Bulldogs. Not only did they lose the chance to win the outright title in the West Division — the best they can do now is get a share — they put themselves in danger of falling out of the top four in the league and losing a first-round bye in the tournament.

The Bulldogs moved into third place in the West, and fifth overall. Arkansas had a game rained out and not rescheduled earlier in the season, and is thus a game ahead of MSU in the loss column.

Mississippi State will try to get back on its feet Friday night against another LSU ace, Jared Poche’. It certainly had a tough time dealing with the first one it faced in Lange.

The projected first-round MLB draft pick scattered six hits and five walks in his seven innings on the mound. The only run he gave up came on a leadoff home run by Ryan Gridley in the first inning.

“This was as great a college baseball game as we have played in this entire season,” Mississippi State coach Andy Cannizaro said. “I thought we played hard. We played well defensively. Alex Lange was outstanding. We just couldn’t get the big hit with runners in scoring position.”

Mississippi State starter Konnor Pilkington (6-5) was pretty good, too. He only allowed two runs in six innings. He gave up six hits, walked four and struck out one.

Peyton Plumlee finished with three innings of relief work. He allowed one run, on two hits, and struck out two.

“Konnor battled tonight,” Cannizaro said. “He wasn’t necessarily sharp. He battled and only gave up two runs. We really fought hard. I love our chances tomorrow.”

The Tigers got to Pilkington for two runs in the fourth inning, when Josh Smith delivered a sacrifice fly and Zach Watson an RBI single for a 2-1 lead.

Smith singled and scored on Watson’s sacrifice fly in the eighth to make it 3-1.

“Zach Watson came through for us with a couple of RBI,” Mainieri said. “We made the plays on defense. It was a great ballgame by both teams. We found a way to win and it feels good to be in the win column.”

After Lange left the game, Zack Hess and Hunter Newman finished up for the Tigers. Each pitched one inning of scoreless relief. Newman worked the ninth to earn his ninth save of the season.