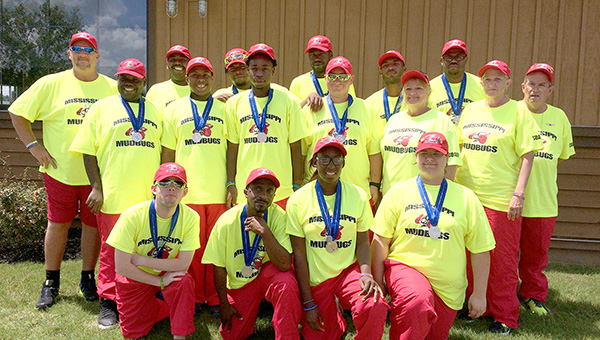 The Mississippi Mudbugs plan a Diamond Gala on June 9 to help raise money to pay for their trip to the national tournament in Bismarck, N.D.

Once again the Mississippi Mudbugs have earned the right to play in the annual Special Olympics North America Softball Invitational Tournament, which is sponsored by Moose International.

The team, which is comprised of 15 Vicksburg athletes, will compete with teams from across the U.S. and Canada.

The event will be held in Bismarck, N.D., and in an effort to assist the team with travel expenses, a Mississippi Mudbugs Special Olympics Diamond Gala has been scheduled from 6 p.m. to midnight June 9 at the Tree House Banquet Hall, 1837 Clay St.

“This will be our sixth time to be invited to the tournament,” head coach Sandy Hearn said.

To participate a team must be invited and qualify on the state level.

This year, the Mudbugs placed first in the state games.

Hearn said during the Special Olympics North America Softball Invitational Tournament, the Mudbugs would compete in the traditional classification, which is comprised of more than 30 teams.

All members are special needs athletes she said, and the Mudbugs are the only team from Mississippi competing in this classification.

There is, however, another Mississippi team that will be playing in the tournament, but it will be competing under the unified classification in which only half of the team members are special needs athletes Hearn said.

Athletes who compete at the tournament are men and women 17 years of age or older. The Vicksburg team’s members range in age from 17 to 40.

In addition to playing in the tournament, Hearn said the local players also get to experience life outside of the River City, and one of the highlights is riding an airplane since many of the players have never flown before, Hearn said.

Another highpoint is experiencing the city where a tournament is being hosted.

“During one of the tournaments that was being held in New Jersey, the kids got to go to New York,” she said.

Moose International covers room and board for all the tournament players Hearn said, but there are still many expenses that must be covered.

The money raised from the fundraiser will go towards these items, which will include more than $9,000 worth of airline tickets for the Vicksburg team and their uniforms.

Julie Miley-Bounds, who is one of the organizers for the fundraiser said the event will include a pulled pork or chicken dinner, a silent auction, entertainment by the River City Dolls, and a cash bar.

A diamond necklace donated by Kay Jewelers will also be raffled off and the winner will be announced the night of the event.

While dozens of businesses and schools have closed to wait out the Great Vicksburg Water Outage of 2017, Vicksburg Catholic... read more