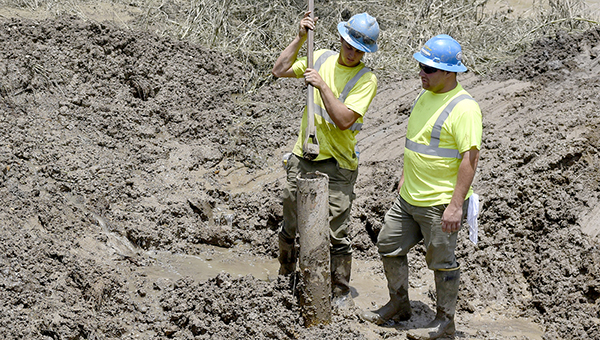 Construction crews continued repairs on a 36-inch water main that ruptured Wednesday that lead to a citywide water outage. Vicksburg Mayor George Flaggs reported Friday afternoon that repairs had been completed and that water pressure in the system would build overnight and into Saturday. (Courtland Wells | The Vicksburg Post)

Employees for Florence-based Hemphill Construction Co. completed repairs to a section of the city’s 36-inch waterline about 10 p.m. and turned the water system over to the city’s water treatment plant to begin moving water.

But city officials said it could be at least 24 hours before the water system is at full pressure, and it may take until the end of next week before a boil water notice that has been put in effect may be lifted.

The city has been without water since after 11 a.m. Wednesday when city workers discovered a leak in the main waterline. The leak forced employees at the city water treatment plant to shut down the plant’s main valve to prevent backflow into the system, cutting off the city’s main water supply.

City public works director Garnet Van Norman said the cause of the leak was a 20-inch butterfly valve installed when the line was built in 1967.

“Tonight we will start turning on our high service pumps; we will turn them on one at a time,” ESG project manager Eddie Busby said at a Friday afternoon press briefing. ESG operates the water plant under contract to the city.

“We will probably bring the pressure up to about 80 psi (pounds per square inch), and then I can turn another pump on after that and it will progressively get better.”

When the system starts coming back on line, he said, there will probably be low pressure for some time while the city opens fire hydrants to release air from the system.

“It’s going to be a slow process, and it will probably be 24 hours before the pressure will be up where it needs to be citywide,” Busby said.

“We have to get chlorine throughout the system, and I would say probably toward the end of the week before we could start drinking from the system,” he said.

Once the chlorine is added, he said, workers will have to take 40 samples a day from different areas on the water system for testing. The city must have good samples for two consecutive days before water in the system is declared safe to drink.

“We’re going to make sure the water is safe to drink,” Busby said.

Van Norman said the valve was installed on the waterline to provide for future expansion of the water plant and had been capped at installation.

“The valve blew the cap off the valve where the 36-inch line transitioned to a 20-inch line,” he said.

He said workers removed the valve and replaced it with a blind flange, a round metal plate used to close off ends of pipe systems. He said concrete was poured behind the flange to give it extra support and allowed to cure before turning the system back to the water plant.

The line holding the damaged valve was buried in the ground and under about 10 feet of floodwater, forcing the city to hire contractors to build a dam to wall off the water and allow workers to get in a repair the problem. Flaggs said trucks from “four or five contractors” moved 16,000 to 20,000 cubic feet of dirt over almost 30 hours to build up the dam, which cleared about an acre of land.

He declined to estimate the cost of building the dam and the repair.

“I think it is remarkable that we had the crisis we had and were able to do it within three days instead of five days,” Flaggs said.

During the outage, the city officials provided bottled water at several locations in the city, and city residents went to spigots owned by the Culkin Water District to get water.

The overuse caused a drop in pressure at Culkin, forcing water district officials to cut of the outside water sources and shut their system down to rebuild pressure to serve water district customers.

Flaggs said the city will reimburse Culkin for the water use.

Flaggs said the city also received donations of water from other cities and businesses, and the city of Jackson which provided the materials to repair the break.

PCA bids farewell to class of 2017