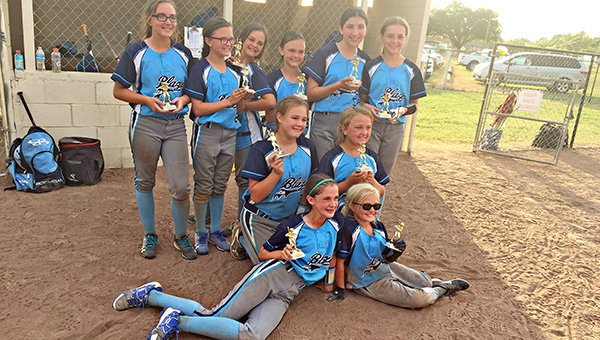 TOURNAMENT RUNNERS-UP: The Vicksburg-based Mississippi Blaze 12U fast-pitch softball team took second place in the Battle of the Bayou tournament played Saturday in Tallulah. The team battled through the losers’ bracket to make it to the championship game, where they fell 4-3 to the Louisiana G Force in extra innings. (Tim Reeves/The Vicksburg Post)

The Bud Light 3-Man Scramble is scheduled for June 17 and 18 at Clear Creek Golf Course in Bovina. The entry fee is $390 per team and includes mulligans, green and cart fees, lunch both days, a practice round and drinks.
Flight prizes based on a 36-team field — up to $1,200 for first place — will be awarded, and there are also prizes for closest to the hole and longest drive in each round.

For more information or to register, call Clear Creek pro Kent Smith at 601-638-9395, or visit the Clear Creek clubhouse.

The Second Annual Gator Golf Classic is scheduled for June 14 at Clear Creek Golf Course. The tournament is a benefit for the Vicksburg High School baseball and golf programs.

The two-man scramble will begin at 1 p.m. The entry fee is $150 per team, or $75 for an individual. Hole sponsorships are available as well, for $100, $225 and $500. The winning team will receive 2 YETI coolers. There are also prizes for the top three finishers in each flight, for the longest drive and closest to the pin.

On May 10, the Clear Creek Ladies Golf Association hosted its annual Laverne Russell Memorial Invitational Tournament. The team of Lynn Case and Joyce Jiohnson won the two-lady scramble with the lowest net score.
In the championship flight, the winners were Sheila Haynes and Tracie Tolbert. They were followed by Lou Hart and Pam Posey in second place, and Caroyln Barker and Angela Peterson in third.

The second flight winners were Jeannie Parker and Judy Troupe, followed by Clara Grantham and Kathryn Loyocano, and Elouise Coleman and Gerry McGraw.

The longest drives were made by Tracie Tolbert, Judy McKnight and Charlotte Johnson. Margie Edwards had the most accurate drive, while Becky May and Gwen Bussa won the closest to the pin awards.

On May 17, CCLGA had a round of individual stroke play. The Flight A winner was Linda McHann, who also logged the lowest putting score. The Flight B winner was Emily Bonelli, and the Flight C winner was Charlotte Crist.

Bubba Hanks made his first hole in one Tuesday, on the second hole at Clear Creek Golf Course.
He used a pitching wedge to make the 106-yard shot. His witnesses were Buddy Hanks, Jimmy Bagby, Sissy Kern and Charlene Hughes.

STARKVILLE — When the calendar turned to April, LSU was muddling through the early part of its Southeastern Conference schedule.... read more