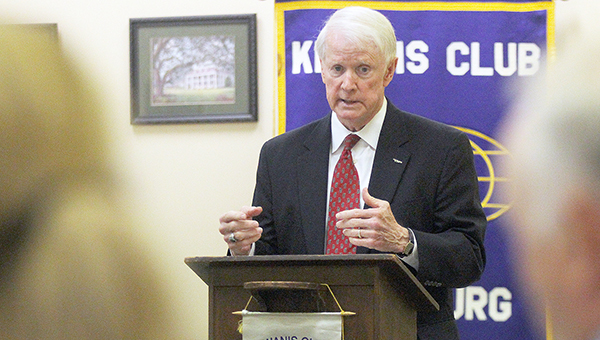 The Muddy Bayou bridge repair is scheduled to be finished by May 27 and the South Frontage slide repair should be completed in June according to Mississippi Transportation Commission Chairman Dick Hall.

“This was a serious situation,” Hall said of the slide repair on South Frontage Road. “It was an emergency project. It was threatening the South Frontage Road. It was about to collapse. Had to shut it down as you know. A couple springheads apparently developed and we had flowing water through the embankment.”

A subsurface drainage system has been installed at a cost of $700,000 to fix the issue.

The Muddy Bayou Bridge was also an emergency project after inspectors discovered that the wooden pilings had rotted during a routine check.

“We closed it immediately,” Hall said. “We researched what structural steel was available and we designed our repair around what we could buy on the market, because we didn’t want to have to sit and wait a few months to have something fabricated.”

The contractor completing the repair has a deadline of May 27 to finish the project, or he will face a $10,000 a day fine for each day he is over, Hall said.

The project on Steele Bayou Bridge is being completed in an effort to extend its lifespan by 20 years, Hall said. He added that the project is expected to be completed in June.

Hall said the long awaited project to connect South Frontage Road to the Outlets at Vicksburg is on going.

“Extensive utility adjustment, relocations had to be made,” Hall said. “Telephone lines, gas lines, power line, water lines and sewer lines had to be moved. The only one that has been fully moved is the phone line.”

Once the utilities are relocated, the state will be able to begin construction on the $17 million project.

“The Legislature has funded the money,” Hall said. “We have the money to do it. We’re ready to do it if we could just get the utilities moved.”

Hall also provided an update on the plans to reconstruct Interstate 20 with additional lanes and said the project is “treading water” and they will not have the money to complete the project until the Legislature adopts a new plan to fund it.

Walkers on the right path