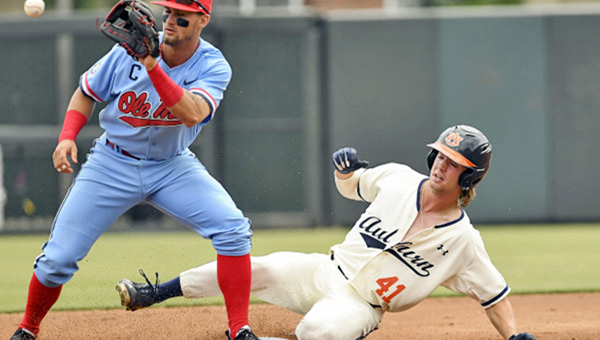 AUBURN, Ala. — After a week of bummer ball, the Ole Miss Rebels got something to smile about on Saturday.
Tate Blackman had a career-high four hits, including a triple, drove in three runs and scored two more as the Rebels broke out of a scoring slump to beat Auburn 8-4 in their regular-season finale.

Nick Fortes and Ryan Olenek each had three hits and two RBIs for the Rebels, who snapped a three-game losing streak.

Ole Miss knocked Auburn starter Andrew Mitchell out of the game in the third inning, and then scored three runs in the fourth against reliever Calvin Coker.

“As well as we pitched the first two games of the series, our bullpen was really weak and porous today,” Auburn coach Butch Thompson said. “We got the series, but did not execute enough out of the bullpen today, and (Ole Miss’ Will) Stokes did a tremendous job. We just couldn’t get anything going after we came out after the delay.”

Stokes took control of the game after a wild few innings.

Ole Miss starter David Parkinson allowed four runs — only one earned — in 4 2/3 innings. He struck out eight batters, but gave up six hits and walked two.

Stokes entered in the fifth inning, following a 58-minute weather delay, and went the rest of the way. In 4 1/3 innings, he only allowed one hit and no walks, and struck out five.

“Stokes did a marvelous job for them,” Thompson said.

Stokes’ performance settled things down after the fast start by both teams. Ole Miss scored in three consecutive innings, capped by a three-run fourth that included RBI singles by Blackman and Fortes, to take a 6-3 lead.
Jonah Todd tripled and scored on a ground out in the fifth to cut it to 6-4, but Auburn did not score again.

Stokes allowed only a leadoff bunt single to Will Holland in the seventh inning, and retired 13 of the 14 batters he faced.

Ole Miss tacked on a run in the sixth on an RBI single by Blackman, and another in the ninth as Blackman scored on a single by Olenek to make it 8-4.

Todd went 2-for-4 with three runs scored for Auburn, and Josh Anthony drove in two runs.
Auburn (34-22, 16-14) and Ole Miss will have one more go-round with a lot higher stakes next week. On Tuesday, they’ll play each other in a first-round elimination game in the SEC Tournament in Hoover, Ala.