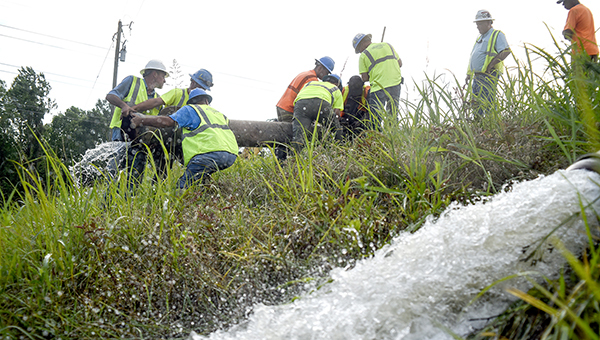 After completing an earthen dam around the area around a damaged water line, work crews began pumping out 10-to-12 feet of flood waters in order to reach the pipe Friday. (Courtland Wells | The Vicksburg Post)

Vicksburg is returning to normal after a major water crisis left the city without water for three days.

“It’s my understanding that we’re less than 10 percent of getting it to the residents, but we’ve got to fill the tanks, too,” Mayor George Flaggs Jr. said Saturday evening. “By 10 (p.m.), we ought to have all the residents back up to pressure, and then we can start increasing our level in our tanks.”

Vicksburg Warren School District spokesperson Christi Kilroy said all schools will re-open Monday after a two-day break because of the crisis. She said bottled water will be provided for the children to drink.

The city had been without water since after 11 a.m. Wednesday when city workers discovered a leak in the main waterline. The leak forced employees at the city water treatment plant to shut down the plant’s main valve to prevent backflow into the system, cutting off the city’s main water supply.

City public works director Garnet Van Norman said Friday the cause of the leak was a 20-inch butterfly valve installed when the line was built in 1967.

The valve was removed by employees for Hemphill Construction Co. and replaced by a flange, a round metal plate used to close off ends of pipe systems. About 10 p.m. Friday, employees at the city’s water treatment plant began turning on the pumps to slowly begin restoring water pressure to the system.

Officials cautioned residents, however, that it may be the end of the week before they can begin drinking water from the tap.

Eddie Busby project manager for ESG, which operates the water plant under a contract with the city, said chlorine will have to be put in the system to purify the water, and then it will have to be tested by the Mississippi Department of Health.

Once the chlorine is added, he said, workers will have to take 40 samples a day from different areas on the water system for testing. The city must have good water samples for two consecutive days before water in the system is declared safe to drink.

“We’re going to make sure the water is safe to drink,” Busby said.

The restoration of water service influenced city and county officials to close water distribution sites in the city at 3 p.m. Saturday.

The sites were established Thursday to provide sources of water for residents for drinking, cooking and other uses.

Warren County Emergency Management director John Elfer said Saturday the decision to close the sites was made because severe weather was predicted for the area, and “with the water coming back, most everyone should have water by tonight. They may have to boil it, but we feel like most everybody’s going to have water restoration.”

Elfer and Flaggs said water will still be delivered to elderly and home bound residents. People who need water can call the city at 601-801-3431.

During the period from 9:06 a.m. Thursday until the distribution centers at the Vicksburg Mall and Warren Central Junior High School closed Saturday, Elfer said, 230,400 bottles of water were distributed to residents. “That doesn’t count the other donations and volunteer groups that gave out water.

“That’s a remarkable statement for this community,” he said. “I saw nobody panicking, everybody cooperated, the city and county and nonprofits, non-governmental folks; just a tremendous response.

I think we learned a lot of lessons. We had emergency plans and we put them into effect. Just really, really, so much cooperation from everyone, a real positive outcome.”

The line holding the damaged valve was buried in the ground and under about 10 feet of floodwater, forcing the city to hire contractors to build a dam to wall off the water and allow workers to get in a repair the problem. Flaggs said trucks from “four or five contractors” moved 16,000 to 20,000 cubic feet of dirt over almost 30 hours to build up the dam, which cleared about an acre of land.

He said the city received donations of water from other cities and businesses, and the city of Jackson which provided the materials to repair the break, and the city sought advice from the U.S. Army Corps of Engineers Vicksburg District, which he said told city officials, “We were doing what we should have been doing. They said the levee was well-built.”

Besides getting bottled water from the city, residents went to spigots owned by the Culkin Water District to get water.

The overuse caused a drop in pressure at Culkin, forcing water district officials to cut of the outside water sources and shut their system down to rebuild pressure to serve water district customers.

Flaggs said the city will reimburse Culkin for the water use.