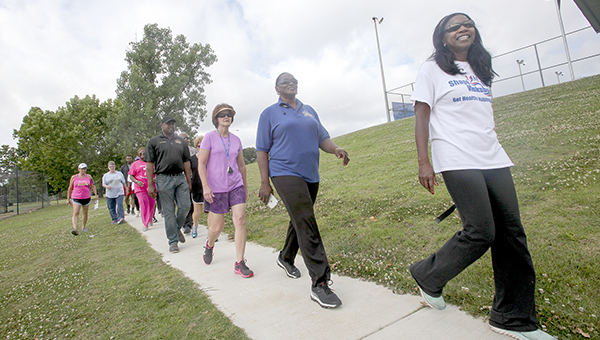 Walkers enjoy the newly-refurbished three-quarter mile walking trail at the Halls Ferry Park Saturday. The walking trail and restorations to the park were funded by the Mississippi Department of Wildlife, Fisheries and Parks. (Courtland Wells | The Vicksburg Post)

Walkers on the right path

The city of Vicksburg opened its newest walking trail Saturday with a ribbon cutting ceremony at Halls Ferry Park.

“I was surprised at the turnout, especially with the water crisis the city has had over the past few days,” she said.

Fondren called the event a celebration.

She also commended Marcia Weaver, the city’s grants coordinator for her efforts in getting grants to improve the parks.

The walking trail was paid for in part by a $99,000 federal Recreational Trails Program grant administered by the Mississippi Department of Wildlife, Fisheries & Parks.

The grant, which is provided by the Federal Highway Administration, covered about 80 percent of the $123,750 project, with the city paying the remaining $24,750.

The city also received a $30,000 commitment from My Brother’s Keeper to provide amenities like benches, signs and fitness stations along the trail, and Shape Up Vicksburg committed to planning the opening ceremonies for the trail and to organize group walks.

The trail’s route goes around the main parking area at Halls Ferry Park, going around the tennis courts and baseball and softball fields.

Fondren said the 3/4-mile walking trail features benches and two water stations, one to allow people to fill their water bottles, and another that is handicap accessible.

“This is a very quiet place, and it’s beautiful with the trees and greenery around it,” she said. “You can walk and sit on a bench and enjoy the quiet. It’s a wonderful opportunity for the community to come out, exercise and have better health.”

Once again the Mississippi Mudbugs have earned the right to play in the annual Special Olympics North America Softball Invitational... read more