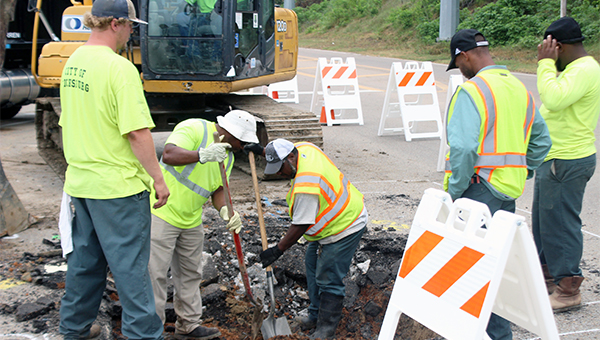 The city of Vicksburg remains under a boil water advisory and some customers of the Culkin Water District are still without water following a break in Vicksburg’s main waterline Wednesday, which resulted in a three-day outage.

Some Culkin customers lost water Thursday when the system lost pressure due to excess usage related to the citywide outage in Vicksburg. Some customers were still without water or had low pressure as of Monday as the Culkin Water District struggled to refill its tanks.

“They explained to me that the elevation like in Silver Creek, Mount Alban Road that tank has to be up closer to full than half and they cannot seem to get that volume up,” Warren County District 1 supervisor John Arnold said. “Air has entrapped in places, so they are trying to go around and open up fire hydrants and let the air bleed out until water comes out.”

Vicksburg also discovered a broken valve at the connection between the city’s water system and a pipe that feeds water into the Culkin system, which was hampering Culkin’s ability to restore water to its customers.

A Vicksburg water department crew began work to repair the broken valve Monday after the problem was discovered.

“We have a 36-inch line that comes up here and heads into town,” Dane Lovell, with the city’s water department, said. “A 16-inch line ties in and heads north to Sherman Avenue and that is where Culkin ties in. When they cut this valve on, apparently that valve broke. We are getting some water, but it partially broke. It is a gear box on the side of it that we will put a pin in.”

The city attempted to repair the broken valve Monday, but was delayed due to rain and the lack of the necessary part to make the repairs.

Flaggs said that they hope to have the repairs completed by the end of day Tuesday.

“It never started out to end up this way,” Arnold said of the ongoing issues faced by Culkin customers. “It just did. They are working around the clock trying to solve this problem and get people back up. To me, that makes a good water district. Things do happen sometime. I know people are hurting for water.”

When asked about the lack of communication between the Culkin Water Districts and customers who remain without water, Arnold said “I don’t know whether its best to have somebody out working on the line or sitting there retuning your phone call.

“They don’t have an update to give them. Once they turn water loose in the line, it is out of their control from that point on.”

Customers on the Vicksburg and Culkin systems are under a boil water advisory.

“If they get this valve fixed up at the city, [Culkin District manger], John Gunn told me they are going to test late [Monday] afternoon,” Arnold said. “It is a one-day wait on the test. Maybe, [Tuesday], afternoon that will be lifted.”

As for the city, they are required to take 40 samples a day from throughout the system until clean tests are reported for two consecutive days. Only then will the Mississippi Department of Health remove the boil water advisory.

But rains Sunday and Monday slowed that process.

“You can’t do samples in the rain,” Vicksburg Mayor George Flaggs Jr. said. “We did some samples [Sunday] prior to the rain and it was looking pretty good. It is just that you cannot do samples during the rain.”

Flaggs said the city was also facing some issues with air in the lines, but they were working to release the air by opening fire hydrants.

“We are opening and closing them to get the air out,” Flaggs said. “Some people may be experiencing rust or something in the line. They need to just keep the faucet open for a while.”