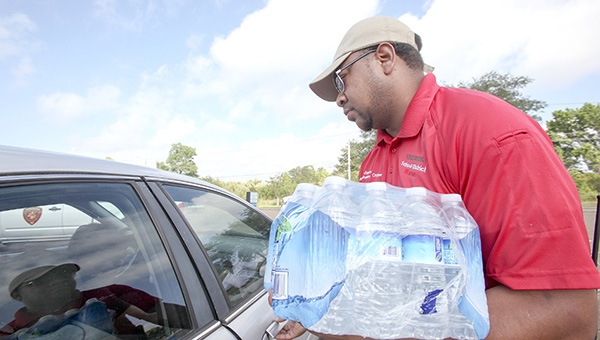 City officials helped thousands of area residents last week who sought water at the main water distribution point at the Vicksburg Mall. A citywide water outage began Wednesday, when the main water line leaving the water treatment facility ruptured. Repairs were made Friday and water service was restored over the weekend. (Courtland Wells | The Vicksburg Post)

Marilyn Holt was in the middle of doing laundry on Wednesday when the water all of a sudden cut off.

“I had a load of laundry in my washer machine and it got stuck there with detergent and stuff on it,” she said. “I got it in the dryer because we’ve got electricity, thank God, but I’m going to have to wash them again.”

Holt was one of the more than 20,000 people who lost water in the city of Vicksburg — and surrounding areas — Wednesday when the city’s water main ruptured.

“All I can really think is, I would much rather deal with not having water than not having electricity,” Holt said late last week. “Anybody who was here during Katrina, or any time without electricity, it is just a pain.”

For Marquita Smothers and her family of five, the days without water have forced them to rely on the kindness of family members who didn’t lose water.

“Very hard,” Smothers said of how it was dealing with the outage. “Packing clothes to go bathe at family members’ houses that have water. Cooking at their houses to bring food home and having to wash clothes.

“We’ve just been filling up buckets to be able to flush our toilets and things like that. Sometimes we will use the water to boil to take baths with.”

Smothers and Holt were some of the thousands of area residents who made multiple trips to Vicksburg Mall on Pemberton, where the city began handing out water since Thursday. They brought empty containers to be filled with water for flushing toilets and received a case of bottled water.

“I’ve had a couple friends who have brought me water, that have brought me containers,” Holt said last week as she waited in the water line. “I think if it is just you by yourself it is a little easy to deal with. It is just inconvenient.”

Vicksburg officials announced Friday that repairs to the main had been fixed.

Over the weekend, water pressure was restored to the system, restoring water service to many residents. But, the system remains under a boil water notice.

Also, some residents in the system, and neighboring systems have reported low pressure, with some in the Culkin Water still without water.

The Culkin district is also under a boil water notice and residents who do have water were asked to conserve.

‘Every chance I get, I will help if I can help’

Not even Sandra Wimberly’s sister knew why they were making the trip from Natchez to Vicksburg Friday.

After watching the news and learning that Vicksburg residents were without water, Wimberly decided that she could not sit idly by. She went to Walmart, bought 25 gallon jugs of water, grabbed her sister and hit the road without a second thought.

“I am a Kingdom kid, I love the Lord,” Wimberly said. “When I saw a need on TV last night, my heart went out to them. When I got up this morning I said Lord, what can I do. I didn’t have a whole lot of money, but every little bit helps so I went to Walmart and got the water.”

Wimberly’s desire to help was spurred by her faith and also her experience overcoming tragedy.

Donations big and small have enabled the city of Vicksburg to provide free drinking water to the more than 20,000 people impacted by the water outage, which started Wednesday.

“It is wonderful,” Reed Birdsong, with Warren County Emergency Management, said last week. “The outpouring has come from everywhere. There are still a lot of good people in this world.”

Brandi Johnson, Erin Bennett and Nat West are among a small group of people in Mississippi who fill a need... read more