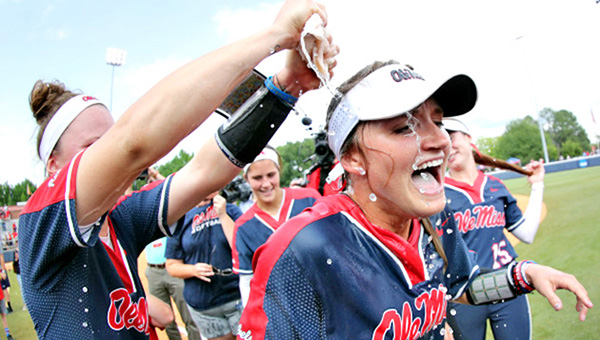 Led yet again by pitcher Kaitlin Lee, the Rebels also provided her with some offensive pop to beat North Carolina 7-2 on Sunday to win the NCAA Tournament’s Oxford Regional.

Ole Miss, which entered the postseason as the ninth-place team in the Southeastern Conference, has won seven consecutive games. It advanced to the super regional round of the NCAA Tournament for the first time in school history.

“It is a great day to be a Rebel. I am so excited for our program, these ladies, our fans. It has been electric here in Oxford,” Ole Miss coach Mike Smith said. “We are just excited here in Oxford, not only to host, but to win it here and have a shot at getting to the College World Series. We are two games away from playing in Oklahoma City. Who would have thought it three years ago, this is where we would be. Hotty Toddy.”

Ole Miss (43-18) will play at UCLA (45-13) in a best-of-three super regional series next weekend. The dates and times have not yet been set.

UCLA, the No. 5 national seed, went undefeated in its regional and beat Cal State Fullerton 9-1 Sunday to advance. UCLA has reached the Women’s College World Series each of the past two seasons.

Figuring out how to beat the Bruins can wait a day or two, however. For now, the Rebels are basking in the glow of reaching uncharted territory for the program.

After shutting out their first two opponents in the regional, the Rebels had to come from behind to beat North Carolina (40-21).

Lee, who has only given up five runs in the Rebels’ seven postseason games, said falling behind fired the team up.

“We enjoy that. We are experienced in that,” Lee said. “If there is anything I love more, it is being behind. Us being like that, in that dugout, was one of the most fun games I have had in the last twelve.”

In the fourth inning, Ole Miss finally got its offense going. Elantra Cox led off with a single and scored on a base hit by Miranda Strother.

Brittany Finney then delivered another RBI single to tie the game. It was the first of two big hits for Finney, who was playing her first game in more than two weeks.

In the sixth inning, Finney belted a two-run home run to put Ole Miss ahead 4-2.
Ole Miss tacked on three more runs in the top of the seventh to blow the game open.

“She knows what it is like to play on this stage. She has nerves of steel. She said she was nervous, but I could not tell,” Smith said. “I am so happy for her. I know it has kind of been and up and down year. She has trusted us in the process. I am so thankful that she is wearing red and blue.”

Finney finished the game 2-for-4 with three RBIs, and Strother was 3-for-4 with two RBIs and two runs scored. Cox went 3-for-3 and scored twice.

“I think Ole Miss did a great job,” North Carolina coach Donna Papa said. “They are a very good team. They put the ball in play a lot and they made it happen. They are just very athletic. There were only two balls that were hit into the outfield — one was over the fence and the other went out into centerfield — most of the stuff was in the infield, but they did a good job of putting the ball in play.”

Lee, meanwhile, continued her remarkable postseason run. She set a school record with her 12th consecutive complete game, and has thrown every pitch for the Rebels in the last seven games.

After her early struggles Sunday, Lee retired the side in order four times in the last five innings.
Altogether, Lee (23-10) allowed five hits and two walks in seven innings. She struck out six. Leah Murray had two hits and scored a run for North Carolina.

“I think the first two innings we had low energy and it was not ourselves. I know it was for me too,” Lee said. “I know in the second inning I struck a girl out and I was not expecting her to swing and miss, so it caught me off guard. It took me a minute to get my fist pump in. I knew then something was a little shaky.”

Vicksburg is returning to normal after a major water crisis left the city without water for three days. “It’s my... read more