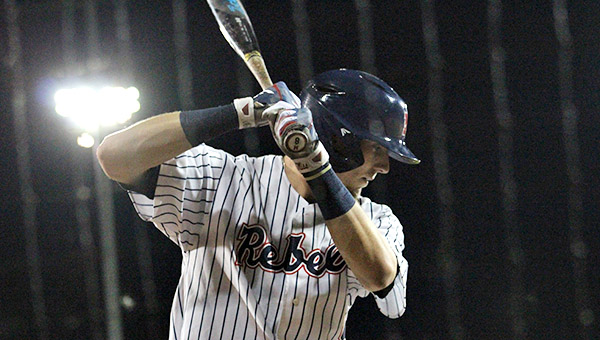 Ole Miss’ Will Golsan waits on deck during the Governor’s Cup game against Mississippi State in April. Ole Miss will play Auburn in the first round of the SEC Tournament Tuesday afternoon in Hoover, Ala. (Ernest Bowker/The Vicksburg Post)

At various points this season, both Ole Miss and Mississippi State have looked like contenders in the rugged Southeastern Conference.

As they head into the SEC Tournament, however, they’re scrambling just to hold on to everything they gained.
Ole Miss (32-24) will face Auburn (34-22) in the first round of the tournament Tuesday at 4:30 p.m. in Hoover, Ala.

The Rebels snapped a three-game losing streak by beating Auburn in their regular-season finale on Sunday, but went just 3-7 down the stretch.

They finished ninth in the 14-team SEC and are No. 32 in the latest RPI rankings issued by the NCAA. Auburn is No. 41 in RPI, which is a key factor in determining the at-large teams for the NCAA Tournament.

Tuesday’s first-round game is single elimination in the SEC Tournament, and could be an elimination game in the NCAA Tournament as well. The loser will be looking at a number of conference rivals in line ahead of it for an NCAA bid, and riding a slump. Auburn had lost seven games in a row before taking two of three from Ole Miss.

Mississippi’s other SEC team, meanwhile, should be assured of an NCAA Tournament berth but has seen its status as a potential regional host take a major hit in the past 10 days.

Mississippi State (34-22) led the SEC West Division for most of the season before losing its last five conference games to slide back into fifth place.

The Bulldogs will play at 8 p.m. Tuesday in an elimination game against the team that started their slump, Georgia (25-31).

Georgia took the last two games of a series from Mississippi State May 12-14 in Athens.

Georgia qualified as the No. 12 seed in the 12-team tournament and needs to win the SEC Tournament to qualify for the NCAA Tournament, but is one of the hottest teams in the league coming into Hoover.

The Bulldogs won their last three series, against Kentucky, Mississippi State and South Carolina. Georgia is 8-3 overall in its last 11 games, and had a five-game winning streak snapped in the regular-season finale against South Carolina.

“We came here and put ourselves in a position to make the SEC Tournament, and I told them to stay positive heading into Tuesday,” Georgia coach Scott Stricklin said after Saturday’s 10-0 loss to South Carolina. “I hate it the way it ended here today, but overall we’re looking forward to playing in the SEC Tournament, and it’s great we have a chance to keep playing.”