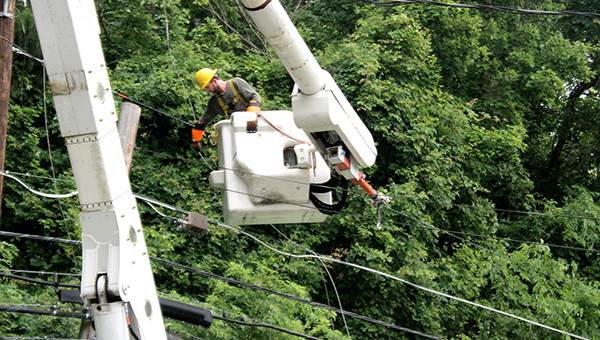 Crews with Entergy work to repair downed power lines Monday morning on Halls Ferry Road. A line of severe weather knocked down power lines in a number of areas in Vicksburg. By Monday morning, power had been restored for many area residents. (Brandon O'Connor | The Vicksburg Post)

Trees blown down by high winds on Entergy transmission lines has knocked out power Sunday afternoon to more than 7,000 customers.

The outage occurred about 2:30 p.m. Sunday when a severe thunderstorm passed through Warren County with high winds and rain.

And the bad news is more rain and storms are forecast for Monday afternoon through evening.

Entergy customer representative Shelia McKinnis said at 7:30 p.m. Sunday, 7,257 customers were without power in Vicksburg and Warren County after a tree fell on a transmission line near the utility’s East Vicksburg Substation on Porter’s Chapel Road.

On Monday morning, McKinnis said about 1,958 customers were still without power at press time.

“The majority is coming off of our southeast substation located on Halls Ferry Road. The other area, which is close in number, is off of our Spencer Potash substation. Not the entire substation is out, but a lot are, near Nailor Road, Fisher Ferry and Rifle Range,” she said.

McKinnis said crews are out in force and working to get toppled trees removed and power lines repaired.

“We are trying to get power restored as quickly as possible. We are hoping to have as many as possible back up by noon today,” she said.

McKinnis asked residents to report any downed power lines and to stay away from those lines.

“We have an elevated threat for an additional two to four inches of rain and flooding of streets in low lying areas,” Elfer said. “[More rain] looks like the most likely time frame is 1 to 6 p.m. today.”

With only a few days left on the school calendar, and with water being restored, classes resumed Monday throughout the Vicksburg Warren School District.

Students throughout the system were out of school Thursday and Friday, as classes were cancelled due to the citywide power outage.

But, even though school officials announced Saturday that classes would resume Monday, some of that was thrown into uncertainty with Sunday’s power outages.

Only at 5 a.m. Monday did school officials give the full go-ahead for classes after most of the area had seen power restored.

Not clear just yet

Even as water began being restored Friday night, some areas Monday morning were still without water.

Some residents in the Culkin Water District, which was not affected by last week’s outage, had seen their water pressure plummet over the weekend, with some residents losing water all together.

Although Culkin officials have not returned phone calls, nor provided any update on social media, a number of residents were taking to Facebook and other social media outlets complaining they still did not have water Monday.

And, the system — as does the Vicksburg and the Yokena/Jeff Davis system — remains under a boil water notice.

Monday, residents in the Culkin district received automated calls saying the system was under a boil water notice and urged residents to conserve water usage.

The boil water notice in Vicksburg is expected to remain through the end of the week.