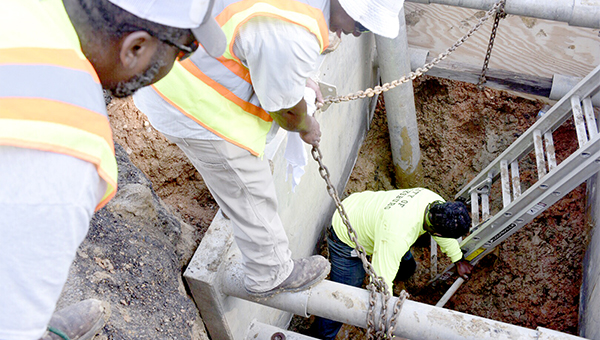 Wayne Jackson with the City of Vicksburg works Wednesday to remove sludge from around a gear box that is restricting water pressure to Culkin. Foreman Victor Parson says once they clear the sludge they'll be able to install a new gearbox which should restore the water.

Repairs have been completed on the valve that connects the city of Vicksburg water system to the Culkin Water District. Water is now flowing to support the Culkin system, Mayor George Flaggs Jr. said.

Full pressure was restored to the majority of the Culkin Water District’s system Tuesday, but customers in the Mount Alban and Silver Creek areas still have low pressure or no water, district manager John Gunn said.

Culkin Water customers lost water May 19 after the system lost pressure because of high usage related to the system-wide outage in the city of Vicksburg that started Wednesday at 11a.m.

Culkin relies on a subsidy from Vicksburg’s system during times of high use, but was unable to receive the needed support during the city’s outage.

“Everything was fine in our system until the majority of people in the city moved over into the system at neighbors’ and friends’ houses,” Gunn said. “We just had a very, very rapid consumption of water and it drained our system.

“We were putting out all we could do there and we had no subsidy from the city that we use in a time like this when the pressure is low.”

The Culkin District continued to struggle to return pressure even after the city’s system was put back on line starting Friday evening. Monday, a broken valve was discovered at the tie-in point between the city’s system and the pipe that provides water to Culkin.

Vicksburg workers began repairs on the valve Monday, but were unable to complete them because of inclement weather and the lack of the correct parts. The work continued Wednesday morning and Vicksburg Mayor George Flaggs Jr. said they hope to have the repair completed by the end of the day.

“Those valves are 50 years old and are more or less obsolete,” Flaggs said. “We are having to get with the machinist and repair at the same time. There are some parts that we have to make over.”

Workers were able to partially open the valve Monday and feed some water into the Culkin system, but full pressure will not be restored throughout the system until full repairs are made.

“Once they had it partially open, we were able to put the pumping station on line,” Gunn said. “That repair is not complete. When they are able to open that pump completely, we can put more than one pump online.”

Wednesday morning, however, a Code Red phone call to residents did notify them that full pressure had been restored and that they were no longer asking residents to conserve water.

The Culkin Water District also remains under a system-wide boil water advisory that will remain in effect until the water is tested.

“Once we have the pressure issues resolved in these locations we will pull a routine round of samples, which is 10 samples, and they will clear 24 hours from that time,” Gunn said.

In the days since the outage started, there has been considerable outcry from Culkin water customers about the lack of information and infrequency of updates. Gunn said they are “doing the best we can” with a small staff.

The next update was provided Monday, saying “staff has been and is working around the clock to restore water to those customers with low pressure or no water,” and that the system is slowly recovering.

The most recent update was provided Tuesday morning that pressure had returned to the majority of the system.

“The biggest deal is, probably on Facebook or Twitter and the technology we have today is that they just didn’t inform people like they should have,” Warren County District 1 supervisor John Arnold said. “That is one thing I will suggest to them. Contact people and let them know what it going on. Sometimes it is hard to let people know ‘yeah you don’t have water and I’m not sure when its going to be fixed.’ That don’t sound good.”

Arnold added if customers need water, there is water available at the Culkin Fire Department and the Vicksburg Police Department.