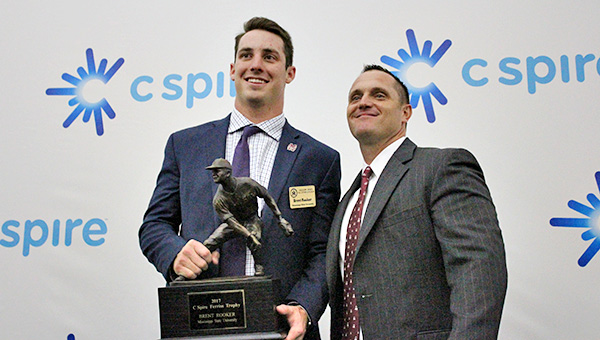 JACKSON (AP) — Mississippi State’s Brent Rooker has dominated the Southeastern Conference in a way that few hitters have ever done.

He hasn’t always made hitting look this easy.

Two years ago, Rooker was an average SEC hitter who only played in about half of the Bulldogs’ games. On Monday, the 6-foot-4, 220-pound junior first baseman won the C Spire Wireless Ferriss Trophy, which is given to the state’s top college baseball player.

The Germantown, Tenn., native said his progression from part-time player to the top of the SEC didn’t happen easily.

A few hours after winning the Ferriss Trophy, Rooker was also named the SEC player of the year by the league. Both honors came as no real surprise after an impressive season that helped Mississippi State finish with a 34-22 regular season record, including a 17-13 mark in league play.

Rooker leads the league in almost every meaningful offensive category. Going into this week’s SEC Tournament, he has a .415 batting average, 20 homers, 28 doubles, 73 RBIs, .873 slugging percentage and 18 stolen bases.

Mississippi State will open the SEC Tournament Tuesday at 8 p.m. against Georgia (25-31).

“It’s pretty cool just to look at that stuff. I try not to focus on that stuff,” Rooker said. “I try to just show up to the field every day and one, get better as player and an individual, and two, give my team a chance to win. That’s what I’ve done all year, and it’s put us in a position to go into postseason play. I’m playing well, I feel good about our chances, so I try to show up every day and give our team a chance to win and the numbers will take care of itself.”

“You just have a feeling he’s going to do something big every time he walks into the box, and a lot of times he does,” Cannizaro said. “He has gigantic hits, he has gigantic home runs, he hits in clutch and pressure situations and he’s a guy who has been great since day one of the season this year.”

Rooker’s biggest game was in April against Kentucky when he hit three homers, including a grand slam, to lead the Bulldogs over Kentucky 10-6.

In remarks during the award ceremony, Cannizaro described how Rooker identified the pattern Kentucky was using to pitch to him — a change-up away followed by a fastball inside on the hands — and planned to adjust by taking a step back in the batter’s box as the pitcher began his delivery.

Sure enough, the first pitch of Rooker’s at-bat was an outside change-up that he took for ball one. The next pitch was an inside fastball. Rooker made his adjustment and hit the ball out of the park for a grand slam.

“It’s been like that every day since I’ve been here. He has a game plan for each and every day. He’s such a mature kid in general, but then his approach to hitting is a next-level, a professional approach on an amateur level right now,” Cannizaro said. “Just the pitch-to-pitch adjustments he’s been able to make are incredible to watch each and every day.”

Rooker is also the first Mississippi State player to win the SEC player of the year award since it was first handed out in 1993.

“It’s an honor just to be nominated, and to receive the (Ferriss Trophy) is really special to me,” Rooker said. “It’s what it represents, it’s who it represents. Coach (Boo) Ferriss is a legendary man who meant a lot to so many people. So it’s a really special honor for me.”