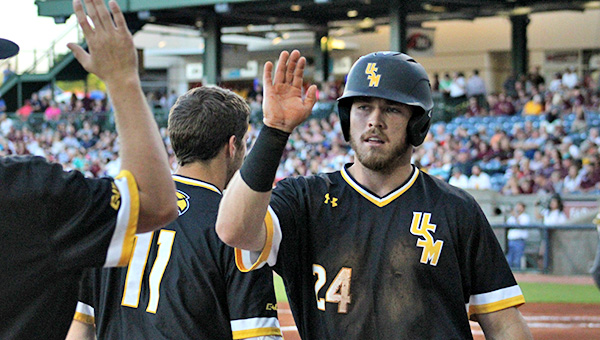 Southern Miss’ Dylan Burdeaux (24) gets a high-five from a teammate after scoring a run against Mississippi State earlier this season. Burdeaux and the Golden Eagles are riding a 14-game winning streak into the Conference USA Tournament. They’ll face UTSA Wednesday in Biloxi. (Ernest Bowker/The Vicksburg Post)

JACKSON — When he stepped to the podium Monday to introduce his players at the C Spire Ferriss Trophy ceremony, Southern Miss coach Scott Berry only half-jokingly suggested that he might be dehydrated by the time he finished talking.

Three of the five finalists for the award given to the best college baseball player in Mississippi — Taylor Braley, Dylan Burdeaux and Matt Wallner — were on his roster. None of them won. In almost any other year they might have, but the exceptional season of Mississippi State’s Brent Rooker trumped all in 2017. Even so, the rarity of having three of the five best players in the state on one team was not lost on Berry.

“That’s pretty impressive. I think that basically shows what kind of year we’re having as a team,” Berry said. “Those guys have been remarkable young men that have worked extremely hard to get where there are. They are great teammates and individuals, and I couldn’t be more proud of the year they’ve had.”

That would be an outstanding year. Southern Miss (44-12) set a school record for regular-season wins, won its first Conference USA regular-season championship since 2003, and is in the running to host a regional in the NCAA Tournament next week.

The next phase of the Golden Eagles’ stellar season begins Wednesday at 4 p.m., when they face Texas-San Antonio (28-26) in the first round of the Conference USA Tournament in Biloxi.

“We’ve been playing very good baseball all year long. You don’t end up 44-12 not doing some things right over the long haul,” Berry said. “We feel like, certainly, coming off the regular season and doing some of the things we’ve been able to do, even though that’s behind us I feel confident going into the next season which is the conference tournament. I know our club does, too.”

Southern Miss enters the tournament not just as C-USA’s best team so far, but its hottest as well. The Golden Eagles have won 14 games in a row — including three last weekend against UTSA — and have scored at least four runs in every game during the streak.

Their last loss was exactly one month ago today, on April 23 against Old Dominion. That 9-2 defeat in the Sunday finale gave USM its only loss in a C-USA series this season. Even though this was already becoming a special year, Berry said that was the day the Golden Eagles found another gear.

“I think our one stumbling block was the Old Dominion series at home, and at that point we understood that we had a target on our back,” Berry said. “We were No. 1 in the league, and that we had to come out each and every day to defend that, and play at our highest level. Not knowing if we would win or lose, but we certainly had to understand that people were coming after you and you were going to have to play well. From that point on, we’ve certainly played very, very well.”

On the field, the root cause of Southern Miss’ success is a prolific lineup. Eight of its nine starters are hitting .300 or better, and the ninth has a .299 average. It is averaging 8.7 runs per game, and has scored eight or more in 27 of 56 games.

The Golden Eagles have scored 487 runs this season, which ranks second nationally behind the 492 scored by Morehead State.

Off the field, Braley said the secret has been great team chemistry.

“I think that’s why we’ve been so successful, is we’ve got a lot of good chemistry going on with the team. Everybody gets along. We hang out, 24-7 every day,” the junior pitcher and third baseman said. “If we’re not at the baseball field we’ll all go hang out somewhere. I think that has a big part to do with it. It’s just a lot of fun being with everybody and hanging out with each other.”

The mix of personalities and talent have combined to make this a special season for Southern Miss baseball. Now, they’re hoping to keep it going for at least another week — and hopefully for another month, all the way to the College World Series in Omaha.

“It’s been unreal. This team has come together real well. We lost a lot last year — a lot of seniors, a lot of good players — but this team has come together really well and played as a team,” said Burdeaux, who is hitting .372, with 11 homers and 66 RBIs. “We just found a rhythm. Offensively, especially, and the pitching has come along. The starting pitching has done a heck of a job lately. It’s been one heck of a season. It’s been a fun ride, and I can’t wait to enjoy the rest of it.”