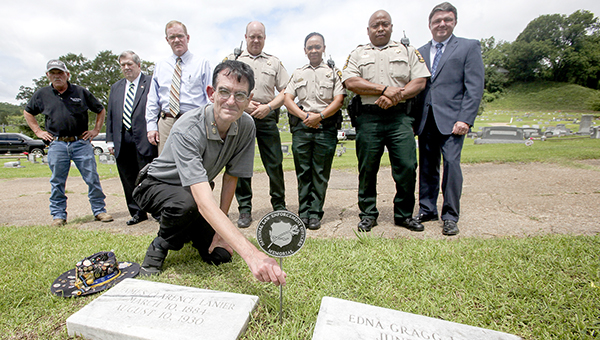 For almost 77 years, Clarence Lanier was a forgotten man.

The Warren County sheriff’s deputy was shot and killed Aug. 10, 1930, by two men outside a business called the Old Log Store on what was then Mississippi 27 in Warren County south of Vicksburg. He was 45.

Although the shooting and the trial of his two assailants made headlines in papers in Mississippi, Louisiana and Arkansas, Lanier was for the most part forgotten over the years; his death remembered only by a marker in Cedar Hill Cemetery next to his wife, Edna, who died three days after him.

That changed earlier this month, thanks to the work of a retired police officer, when his name was placed on the National Law Enforcement Officers Memorial Wall in Washington, D.C., a memorial to police officers killed in the line of duty.

It was a search that began in 2015. Doug Arp, a retired Vicksburg police officer, whose efforts resulted in Lanier’s name being placed on the National Memorial, received a telephone call that the deputy’s name was included on “Officers Down Memorial,” a website honoring law enforcement officers killed in the line of duty.

“I called the National Memorial in Washington D.C., and they said, ‘We don’t have it,’” Arp said. With the help of Venable Moore, Cedar Hill’s sexton, Arp found Lanier’s grave, and began his two-year journey for Lanier’s story.

According to accounts, the men blamed Lanier for a raid on a whiskey still that occurred several weeks earlier. They cursed at him as he drove past the store, and Lanier stopped to confront them.

At some point during the argument, the two men ran inside the store and Lanier went to his car. As he was entering his car, witnesses said, the two men came out of the store with guns and opened fire on Lanier, who was hit in the head with buckshot.

The men were arrested and convicted of murder, and one sentenced to be hung. The jury was unable to agree on the punishment of the second man, and he was sentenced to life in prison.

Mississippi Supreme Court overturned the verdict of one of the men. The other man was appealing his verdict, but there were no other accounts indicating if his appeal was successful.

Arp, who researched the deaths of other Warren County deputies in the line of duty for their inclusion on the wall, said Lanier’s name never came up.

“When I did the research 20 years ago, they didn’t have all these websites that had him on that.”

Officers Down Memorial had evidently been able to find it, and the national memorial did not have it. When the name came up on that, we said obviously we forgot this man.”

“When the National Memorial Wall was established years ago, they (the Law Enforcement Memorial Foundation) did their best to include the names of all officers who had already been killed,” Warren County Sheriff Martin Pace said.

“Doug brought this to my attention two years ago, and I credit Doug with doing all the research. He volunteered to do the research to submit it to the National Law Enforcement Officers Memorial. And we’re proud to say today deputy Lanier’s name is on the National Memorial Wall in Washington, D.C., as it should be.”