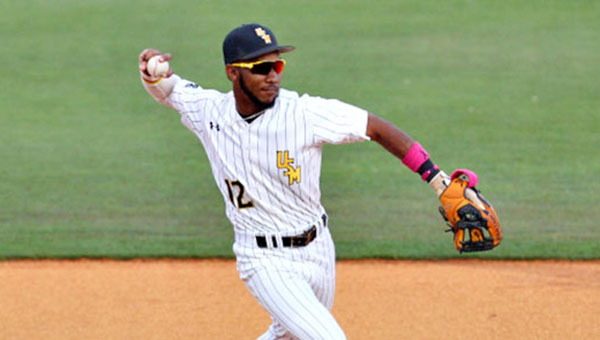 Southern Miss shortstop LeeMarcus Boyd throws to first base Wednesday against UTSA. The Golden Eagles lost 9-2 to drop into the losers’ bracket in the Conference USA Tournament in Biloxi. (Joe Harper/Southern Miss Athletics)

BILOXI — It’s been a historic, record-setting season for Southern Miss’ baseball program. On Wednesday, that definition was extended to include the wrong kind of history.

Texas-San Antonio tied a Conference USA tournament record by hitting seven doubles — including three by C.J. Pickering, which also tied a record — and beat the top-seeded Golden Eagles 9-2 in the opening game of the C-USA Tournament in Biloxi.

“It’s baseball,” Southern Miss coach Scott Berry said. “You’re going to have one of these games. You just hope it’s not going to happen at the wrong time. Right now, I don’t know if there is a right time to have one, but we’re still playing baseball. We just came off a great regular season with 44 wins, 12 losses and 14 straight wins. At some point it’s going to happen. It happened, and we have to move on. That’s the bottom line.”

“I hope we take this loss and learn from it. If we come out and do the same thing tomorrow I guarantee you we will be going home,” Berry said.

Southern Miss had a 14-game winning streak snapped. The streak included a three-game sweep on the road against UTSA last weekend, but the Golden Eagles never got on track in their fourth meeting with the Roadrunners.

Smith was beat up for four runs, three earned, on seven hits in just 2 2/3 innings. Driver fared even worse, allowing four runs on three hits in one inning.

Pickering doubled in the first, third and fourth innings. He drove in two runs and scored twice to stake UTSA to an 8-2 lead.

“He didn’t make pitches like he needed to. We rode that horse for a while. He gets a mulligan on that one,” Berry said of Smith’s performance. “He competed. Hats off to UTSA. If he made a mistake, they hit it.”

Southern Miss kept up early. Dylan Burdeaux led off the bottom of the first inning with a double and scored on a passed ball, and Taylor Braley hit a solo home run in the third to make it 4-2.

Southern Miss had runners on in every inning, but never scored again. It left 10 runners on base, including three in the seventh inning and two more in the eighth.

“Dressler, their lefty, did an outstanding job. He was able to sink the ball and keep the ball away from us,” Berry said. “We left 10 men on and didn’t get the big hit. They got a lot of two-out hits and RBIs in those situations, and we didn’t.”

Southern Miss reliever J.C. Keys settled things down after the rough start by Smith and Driver. Keys pitched 5 1/3 innings, allowing only one hit, two walks and one run. He struck out six.

“I was really proud of J.C. Keys. He was able to come in, hold them down and give our offense, which in the past we were able to overcome that but we didn’t tonight, a chance back in the game,” Berry said.