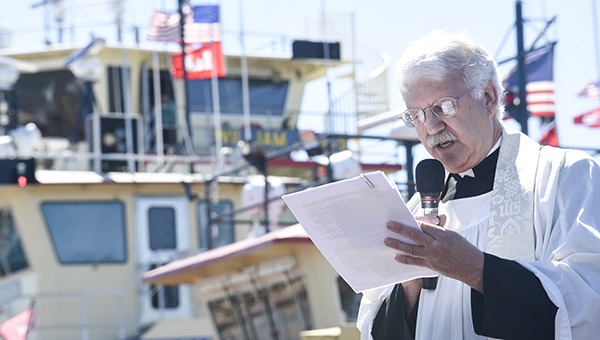 The Rev. Sam Godfrey blesses the fleet of the U.S. Army Corps of Engineers’ mat sinking unit Thursday. The fourth annual blessing is conducted prior to the fleet’s departure in July. (Courtland Wells | The Vicksburg Post)

The U.S. Army Corp of Engineers’ mat sinking unit will soon be heading out for a months long tour of duty on the Mississippi River. Before their planned departure in July, the fleet and its crew received a blessing for a safe season during the Vicksburg District’s fourth annual Blessing of the Fleet Thursday.

The nine boats in the mat sinking fleet, and the dredge Jadwin, were blessed by Rev. Sam Godfrey, with Christ Episcopal Church.

“It is my privilege to be here today,” Godfrey said. “Almighty God and Father. As we gather today to pay tribute to the crew and the fleet of the United States Army Corp of Engineers’ Mat Sinking Unit and their families, we want to begin by taking a moment to acknowledge your greatness and your goodness in our lives.”

The fleet includes 300 crewmen and their trip will last from mid-July through December or January depending on the weather. During the trip, the crew will travel between 900 and 1,000 river miles and lay 260,000 squares of reinforced concrete matting, enough to cover 600 acres of shoreline. That will be double the amount of matting the team placed last year.

“The mat sinking unit is a one of a kind operation,” Vicksburg District commander Col. Michael Derosier said. “It is tasked with the alignment of 800 to 1,000 miles of navigation channels, which protects levies and delivers on our flood risk management and navigation mission requirements.”

The Jadmin will depart on July 1, weather permitting, and spend months dredging channels and waterways following the spring floods along the Mississippi River.

The Blessing of the Fleet ceremony dates to medieval times when European fisherman received a blessing from a local priest at the start of the season.

“We’ve reinstated this tradition here within the Vicksburg District to recognize the efforts and the sacrifices of our river operations revampment and dredging teams as they depart shortly for what will be a lengthy season,” Derosier said.

Each boat in the fleet and its crew received an individual blessing from Godfrey for safe passage and good weather throughout the season.

Vicksburg sends off Class of 2017

The members of the Vicksburg High School class of 2017 danced and cheered their way into the night Thursday evening... read more