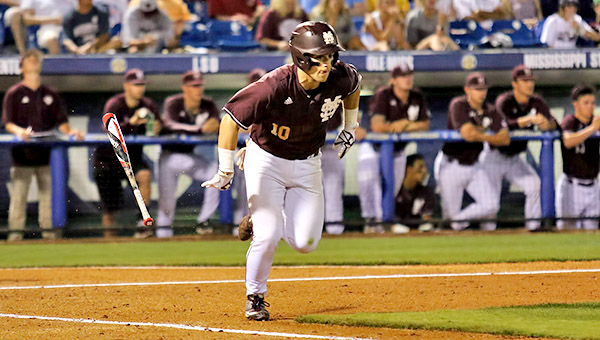 HOOVER, Ala. (AP) — Two nightmarish innings put Mississippi State back on the bus to Starkville.

Blaine Knight gave up one earned run over 6 2/3 innings, Jax Biggers had three hits and drove in three runs, and Arkansas eliminated Mississippi State from the Southeastern Conference baseball tournament with a 9-2 victory Friday night.

Arkansas (41-16) advanced to face Florida in the semifinals Saturday. LSU will play South Carolina in the other semifinal. The championship game is Sunday at 2 p.m.

It was the second loss of the day for the Bulldogs (36-24). They gave up 11 runs in the eighth inning to top-seeded Florida in the first game of Friday’s session and wound up losing 12-3 to fall into the losers’ bracket.

In the nightcap, Arkansas scored six runs in the sixth inning to take a 7-1 lead. They added two runs in the ninth on a double by Biggers off Brent Rooker.

Rooker, the SEC Player of the Year and normally a first baseman, was pressed into duty on the mound after the Bulldogs’ pitching staff was depleted over the course of the day.

Cole Gordon allowed one run in seven-plus innings against Florida, but it took five relievers to finish the game as the bullpen imploded.

It was a similar story against Arkansas. Starter Jacob Billingsley pitched into the sixth inning despite allowing three hits and five walks. Four pitchers followed, and each gave up at least one run.

Rooker moved to the mound in the eighth inning and faced three batters. He walked one, gave up the two-run double to Biggers — on a high, inside pitch that squirted past the third base bag and into open ground down the left field line — and got Grant Koch to fly out to right to end the inning.

Knight (8-4) struck out nine and gave up five hits and a walk. Dominic Fletcher started the big sixth inning with a solo home run, and Luke Bonfield drove in two runs.

Cody Brown went 2-for-4 with a solo home run for Mississippi State, which finished with only five hits.

The Southern Cultural Heritage Center will be busy this summer offering workshops for all ages. “We usually get a great... read more