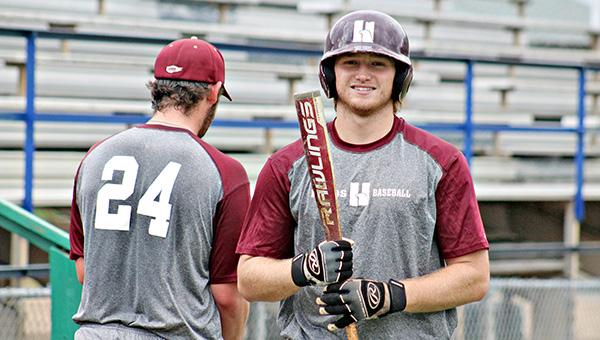 His 2014 team made it to the NJCAA Division II World Series. They won some games. They got to the championship round against Mesa (Arizona) Community College.

And then, in 11 painful innings, they lost.

It was a once in a lifetime experience, but also a once in a lifetime opportunity missed for Temple and the program he has led for 12 years. The Eagles were ranked No. 1 in the country for most of the 2015 season, but lost in the Region 23 championship game. They slid back to a 25-22 record in 2016.

The two years since that championship game were a reminder to Temple how fleeting the opportunity can be, and now he’s got it again.

Hinds beat Jones County Junior College for the Region 23 championship last week, and on Saturday night will begin its run in the Division II World Series in Enid, Oklahoma. The Eagles are seeded sixth in the 10-team World Series, and for Temple getting to experience the event is as great as getting another crack at winning an elusive national title.

“Enid, Oklahoma and the World Series is just a special event. The town and the organization of the tournament is amazing. I don’t know how you could do it any better. Enid is a place that gets to you,” said Temple, a Vicksburg native. “For me, personally, getting an opportunity to go back is a dream and a blessing. I’m so glad to have that opportunity. Playing for the national championship last time, playing 11 innings, feeling like we lost the game by a couple of inches two times in a row, sure I hope we can go and have that same type of performance and win one more game. That would be nice.”

Temple said this year’s Hinds team reminds him of that 2014 squad. Both had ups and downs early in the season before getting hot at the end.

This year’s team lost six of its last nine regular-season games and hasn’t lost since. The Eagles swept a playoff series from East Mississippi to advance to the Region 23 tournament, and then won all four games there — including one each against No. 1 Jones County and No. 2 LSU Eunice, both longtime nemesis of the program.

Hinds had an eight-game winning streak early in the season, and another stretch halfway through where it won 13 out of 15. Outfielder Jackson Mitchell, however, said it’s just been during this most recent six-game winning streak that everyone started believing the Eagles really are championship contenders.

“Not until about the playoffs, I think,” Mitchell said. ‘We had a good run in the middle of the season. We won something like 12 of our last 14. Then we went on a bad streak, and we all started playing good again. I guess East Mississippi was the first time we saw that we could make it, and everybody started believing.”

Among the reasons for Hinds’ surge has been the play of freshman right fielder Will Pierce. The former St. Aloysius star started the year slow while recovering from a foot injury and is hitting just .276 overall, but is 7-for-21 (.333) in six postseason games.

“I got my feet on the ground in the middle of the year and picked up the pace,” Pierce said. ‘I kind of got the ball rolling and felt better with myself. I got my bat rolling at Southwest. I strung some hits together, got a little momentum, and I just tried to keep it up throughout the rest of the year.”

Pierce has hit safely in five of the last six games, with two doubles, five RBIs and five runs scored.
He drove in two runs in the 8-7 win over Jones that sent the Eagles to the World Series, including what turned out to be the winning run on a fielder’s choice in the eighth inning.

“I was hoping for one in the gap or something, but I was satisfied with what I did,” Pierce joked.

“I’ve dreamed about this since I was a little kid. Growing up, playing USSSA ball, you see these guys going off to the World Series and you hope you’ll be able to do that one day. It’s just a dream come true to be able to do this with a great group of guys,” Pierce said. “Coach Temple did a great job. He stayed on us the whole time and told us we had it in us. That we had the talent to do it. I’m just glad we got to put it together there at the end and get hot and make it to the World Series.”

Now the Eagles need to do something while they’re there. They’ll begin their run Saturday at 7:15 p.m., against No. 3 seed Pitt (North Carolina).

Hinds (34-16) has the second-fewest wins of any of the 10 teams at the World Series — only it, Lansing (Michigan) at 38-15 and UConn Avery Point (Connecticut) at 27-14 have less than 40 —but is on an even playing field in terms of experience. Only Mercer County (New Jersey) is a returnee from last season.

“I think we have great momentum and great energy. We’ll try to keep the same energy throughout this World Series as we had in the regional, and I think we’ll be fine,” Pierce said.

They’re also ready to appreciate and enjoy the ride.

“It’s what you work for since day one in August,” said pitcher Adam Jackson, a former Clinton star. “All of the blood, sweat and tears you pour into practice, the long hours in the weight room, at the field, the off time away from practice, just all the time you put in to get to this point where we are. To get to the World Series means all the hard work is paying off.”