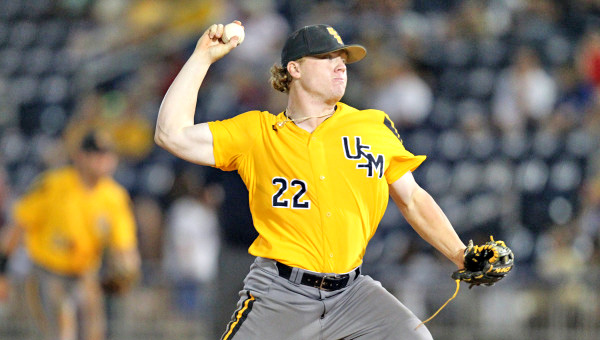 BILOXI — Southern Miss finally put Texas-San Antonio in the rearview mirror, and started looking ahead to the stretch run at the Conference USA baseball tournament.

Taylor Braley threw eight shutout innings and drove in a run as Southern Miss beat UTSA 7-1 Friday night in an elimination game at the C-USA Tournament.

“No better guy to hand that ball to, especially in that situation,” Southern Miss coach Scott Berry said. “Just outstanding. He couldn’t have been any better and our team played terrific all the way around. We did a lot of things well and deserved to have that win.”

Southern Miss (46-13) was playing UTSA (29-28) for the fifth time in the last six games, following a three-game set in San Antonio to end the regular season and the opening game of the C-USA Tournament.

UTSA won the matchup in the opening round of the tournament on Wednesday, but Southern Miss came back to win its second elimination game in a row and advance to the semifinals.

The Golden Eagles — the defending champions — will have to beat Charlotte (34-22) twice on Saturday to get to Sunday’s championship game.

Braley (6-2) scattered seven singles over eight innings, walking none while striking out nine. After scoring nine runs in its opener against Southern Miss, UTSA only managed one in its next 18 innings.

“He’s got great stuff, and his slider, it got rolling there in the middle of the game. It was an unhittable pitch for us,” UTSA coach Jason Marshall said.

Bryant Bowen homered for the Golden Eagles, who had 12 hits in the game. Mason Irby was 3-for-4 with an RBI, LeeMarcus Boyd drove in one run and scored another, and Dylan Burdeaux was 2-for-4 with an RBI double and a run scored.

Burdeaux became the first Conference USA player to reach 100 hits in a season since East Carolina’s Trent Whitehead finished with 105 in 2009.

Ole Miss runs out of magic against UCLA

LOS ANGELES — Ole Miss got plenty of runners on base, and plenty of scoring chances in Game 2 of... read more