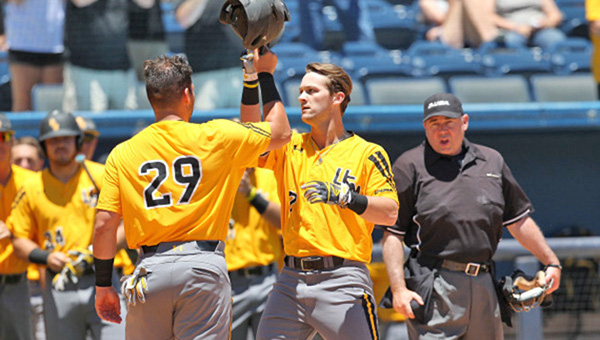 BILOXI, Miss. — Listening to Matthew Guidry explain his approach before connecting on arguably the biggest hit of his career at Southern Miss, the moment is made to sound almost routine.

In fact, the freshman second baseman’s two-out, full-count fly ball over the netting in right-center field Thursday afternoon was one of the primary reasons the Golden Eagles remain alive in the Conference USA Tournament.

Guidry’s three-run home run in the second inning gave Southern Miss a lead it never lost, as the top-seeded Golden Eagles shook off Wednesday’s first-round loss with a 5-2 victory over fifth-seeded Louisiana Tech in an elimination game.

“We knew we had our backs against the wall losing (Wednesday) night, but it’s kind of crazy, because you might think we put pressure on ourselves, but we really don’t,” said Guidry, who went 2-for-4 with three RBIs and two runs scored. “We just come out here every single day and try and be consistent, not try and do too much. We just kind of came out here and got the train rolling again.”

Southern Miss (45-13), which never has gone two games-and-out in the C-USA baseball tournament, will play an elimination game Friday at 6:30 p.m. against Texas-San Antonio.

It’s the fifth time in the last six games the teams have played each other. They met in a three-game series to finish the regular season, and then UTSA beat Southern Miss 9-2 in their tournament opener Wednesday.
Louisiana Tech (36-20) was the second team eliminated from C-USA’s eight-team postseason field, following seventh-seeded Florida International’s 8-4 loss to Florida Atlantic in an elimination game earlier Thursday.

“They are one of the best teams in the country and they don’t play back-to-back bad baseball games,” Louisiana Tech coach Lane Burroughs said of USM. “They’re not going to do it very often, and that’s why they’re the best team in our league. We had opportunities. We had guys on base. The difference is, they got the big hit, and we didn’t.”

After seeing a 14-game winning streak snapped with the loss to UTSA on Wednesday, Southern Miss wasted little time getting back on track.

Taylor Braley singled to lead off the second inning and Bryant Bowen walked with two outs before Guidry sent a Matt Miller (1-2) pitch high over the outfield netting in right-center field for a 3-0 lead.

“Bryant had had a good at-bat right before me, and I knew (Miller) definitely didn’t want to walk (batters) back-to-back,” Guidry said. “He’d been pounding the strike zone all day, so I knew it was probably going to be somewhere near the zone. He kind of left one out over the plate, and that was about it.”

Southern Miss went up 4-0 in the third inning when Dylan Burdeaux walked and eventually came around to score on a bad relay throw on a potential double-play grounder.

The Bulldogs whittled the lead to 4-2 on solo home runs by Cody Daigle in the third inning and Marshall Boggs in the fourth.

But Kirk McCarty (10-2) and closer Nick Sandlin, who pitched the final two innings to pick up his seventh save of the season, kept Louisiana Tech off scoreboard for the final five innings.

Southern Miss added an insurance run in the top of the ninth on a run-scoring single to right field by Cole Donaldson.

McCarty scattered nine hits over seven innings, allowing two runs. He struck out six and walked none. Sandlin allowed one hit and a walk while striking out four.

Southern Miss coach Scott Berry was especially pleased with McCarty’s outing. By going seven innings he helped save the bullpen for a potentially long weekend ahead. Southern Miss will need to win four more games to claim its second consecutive C-USA tournament championship.

“That was a big help when you look at where we are in the losers’ bracket and how many games we have to cover. He’s done for the tournament, obviously, but we didn’t have to burn anybody else,” Berry said. “It’s a game-by-game approach, and it has been all year. We’ll concentrate on tomorrow night at 6:30.”