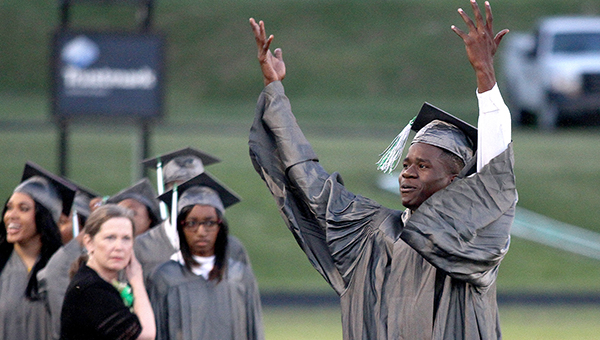 Vicksburg sends off Class of 2017

The members of the Vicksburg High School class of 2017 danced and cheered their way into the night Thursday evening as they celebrated the end of high school during the annual commencement exercises at Vicksburg Memorial Stadium.

The 229 members of the class, one of the biggest in recent years, combined to receive $1,957,820 in scholarships for their accomplishments in the arts, sports and academics throughout the four years of high school. Each student who was awarded a scholarship to continue their education was recognized during the ceremony.

“We did a little research and found out that in 2002, 228 students graduated from Vicksburg High School,” principal Deowarski McDonald said. “We had never reached the 200 mark since 2002. This is a special, special class simply because of that, but also because of who they are. It is a great bunch of kids, all walks of life, varying interests, just a great group.”

Before the presentation of diplomas, the top ten students and those with a GPA in excess of 4.0 were recognized and awarded with a plaque for their achievements.

The valedictorian for the class of 2017 was Nicholas Crasta, who graduated with a 4.88 GPA. He will attend Ole’ Miss in the fall where he plans to double major in Political Science and Biology with the hopes of becoming a nephrologist.

Crasta began his speech by congratulating his parents who were celebrating their 20th wedding anniversary Thursday evening.

“Before I begin, I would like to wish two very special people in my life a happy anniversary,” Crasta said.

He recognized the achievements of the class of 2017 both athletically and academic, before providing his class with his “Alphabet to life.”

“A, accept the challenge, B, believe in ourselves, C, celebrate our achievements and D, dream big,” Crasta said.

He concluded his alphabet by encouraging his classmates to “be zealous in all that we do.”

The ceremony was concluded with the reading of the class poem “Oh, It’s Just High School,” which was written by class of 2017 member Bobbi Taylor.

“We have struggles and changed, all to prepare us for what’s to come. We have had good days, days so great we never thought we’d leave,” the poem read.

Tourism brought in more than $203 million to the local economy in 2016 and supported 4,000 local jobs according to projections... read more