Warren Central sends off its graduates 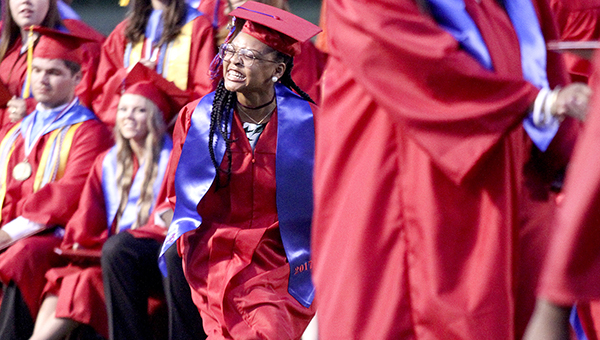 Willis and Ouida Cochran and Lois Kaufman had front row seats to watch their grandson, Evan Willis Cochran, get his diploma Friday night.

Sitting on the track in the shade at Warren Central High School’s football stadium, the Cochrans, from Laurel, and Kaufman, from Mobile, Ala., were in a good position to see Evan walk to his seat and get his diploma.

“This is our second time here,” Willis Cochran said. “We were here three years ago when his brother, Andrew, graduated. We have one more, Seth Mitchell, but he’s 9, so we have a ways to go.”

The Cochrans and Kaufman were among the hundreds of families and friends who gathered at Warren Central to watch the class of 2017 graduate during ceremonies at Warren Central. Many of the spectators carried gifts for grads or wore T-shirts with the grad’s name on the front. Even more brought bouquets of balloons.

Melinda Jones, who came to see her daughter Alexis graduate, said she and her family had been sitting in the stands since 5:30 p.m. for the 7 p.m. ceremony. Alexis’ aunt, Belinda Voss, was sitting on the row just below Jones, holding a clutch of balloons.

“We’re not letting these go; she’s taking them home,” she said.

On the first row of the bleachers, April Wigley was trying to control a bouquet of balloons for her niece, McKenzie Milburn.

“We’re very proud of her,” she said. “She’s going to (the University of) Texas to study pharmacy.”

As the prospective graduates made their way onto the field to the strains of Sir Edward Elgar’s “Pomp and Circumstance,” the spectators stood and cheered, some yelling out names as the members of the procession made their way to the seats, fighting to keep their caps and gowns still against a stiff wind.

As they took their seats, the young people waved or pointed to people in the stands, some even trying to get some message to one of the faces in the crowd.

In high school, salutatorian Sarah Chipley told the crowd, “We all learned about being responsible. High School has been about making our own choices and handling our own responsibilities. Our senior year has been our best and most challenging year of high school.

“Out time has gone quickly, but all have memories that will remain here.”

“We have all accomplished much, and this is the day we are recognized for it,” Valedictorian Trevor Talbot said. “We appreciate this recognition, but … none of us could be where we are today without the dedication and countless hours of work from our parents or guardians and teachers and school staff.”

Those were the people, he said, “Who pushed us and cheered for us and they really cared about our success.”