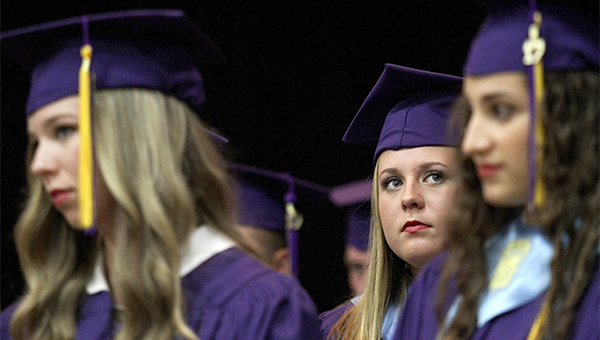 Amid the confusion of people putting on gowns and straightening caps in mirrors in the small dressing room at the Vicksburg Auditorium, Mary Peyton Peck was standing in the doorway taking a selfie.

“This is the big day; I thought this day would never come. I’m excited it’s here,” she said. “When we get through, 30 of us are going to Orange Beach (Ala.).”

Peck was one of 40 St. Aloysius seniors receiving their diplomas Saturday during the school’s 149th commencement ceremony at the auditorium.

“This is a sad day for me, but I’m happy for them, because they’re starting new challenges in their lives,” said teacher and senior adviser Dawn Meeks.

While the prospective grads got ready for their big day, family members and friends began entering the auditorium looking for a seat and familiar faces. In one section, Stephanie Duhon Wallace was saving several rows of seats for family members coming to watch her oldest daughter, Elizabeth an honor graduate, get her diploma.

“We’ve got family members coming from Texas and Louisiana,” she said. “There will be 100 cameras around here.”

Elizabeth Wallace was not the only participant in the program. Wallace’s other daughter, Emily, a sophomore, plays saxophone in the band, where she is a section leader. Her two sons are in sixth grade and are also honor graduates.

While Wallace’s family was gathering, Candy Carter and her sister-in-law Paige Carter, both of Ocean Springs, were standing on the auditorium floor waiting for family. Candy Carter’s cousin is valedictorian Anna Kay Doiron.

“The class of 2017 has learned from the diversity of inherent in our school and the quality of our marvelous teachers … we have learned so much at St. Aloysius, which has molded us into who we are today,” said salutatorian Charles Martin.

“We have learned that some times when we take risks, we can actually achieve what we thought was impossible.”

Doiron, who transferred to St. Aloysius from Ocean Springs in her junior year, recalled her initial experiences during her first years.

“I think I’ve changed a lot since then,” she said of those early months, “The moment I walked through the doors of St. Aloysius, something came over me and and I was at peace. It’s so amazing. The teachers care about every single student; they want them to excel and exceed, no matter how lonely you may be.

“We are about to take one more leap of faith; one that’s bigger than any we’ve ever taken,” she said. “I’d like to thank my class for welcoming me and taking me in as one of your own. You will never know how much that meant to me. Congratulations to my class. We did it.”

Negligence on the part of Riverside Construction Co. was the cause Michael Collins’ death, according to a lawsuit filed by... read more