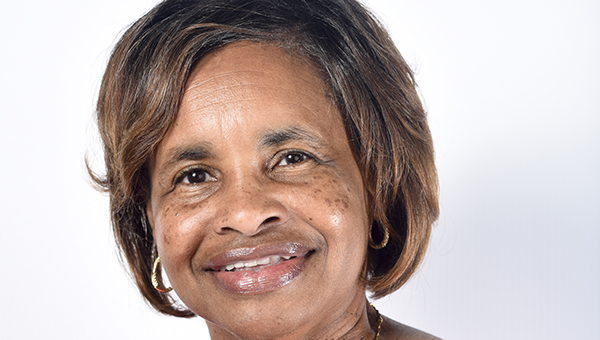 Long-time volunteer has no plans to slow down

Trudy James-Brown is a member of an army for good.

The Vicksburg native is in her second year as president of the Salvation Army Auxiliary, an organization she has been a member of since 2004.

And it took a band of angels to get her involved.

Their influence began when James-Brown’s daughters wanted to be Girl Scouts.

“Like most parents, you get involved after you have children,” she said. “When my girls were younger, they wanted to be Girl Scouts. A friend of mine and I got together and formed a Girl Scout troop.”

As her daughters became older, they became involved with community service programs, and to get the required hours, they worked with Angel Tree.

“I just couldn’t let them go and just drop them off, I stayed with them,” she said.

At first, her involvement with Angel Tree was taking the information for the children in need and helping people who wanted to adopt an angel.

“Then I volunteered to go to the distribution center, and I saw that side,” James-Brown said. “Then I started taking vacation days and processing (applications) — that lasted all day, and I worked on that, so I saw the unit part. Then I began sorting the toys. I got a chance to see the whole process. I just evolved from that.”

It took several years before she became a member of the auxiliary; her wait to become an officer was much shorter.

“Once I became a member and worked there as an auxiliary member, an election came, and they wanted officers,” she said. “I didn’t think I was ready, but of course, they encouraged me to run and I started off as second vice president. I’ve been going ever since.”

James-Brown said serving as auxiliary president “is busy, busy, but there’s no way the Salvation Army can function without volunteers. We must have volunteers to do what we do.”

“It’s so fulfilling, and once you have those projects, they seem like they don’t get off the ground and then they come to fruition and the results are … you just can’t put word to it. You have the success of those projects but it takes quite a few people to put those projects on, and we have projects throughout the year.

As president, she said, part of her job is to assist with all the activities.

“You have quite a few people who are really capable of doing a good job as chairman, but you assist the chairman. We have 90 members. When first took office, I told them, ‘We are one body and many members and each member has their own expertise; the area where they like to work where they feel comfortable,’ and they do that.”

All the women, she said, work where they enjoy themselves; where they feel they can do the best job.

“That’s good. It gives everyone an opportunity to have some fun, enjoy themselves and make a difference. Our support is a group effort. We work together as a team. If one can’t do something, another one will. The ladies donate their time, their services, and they work hard.”

And while James-Brown said she has her heart in all the auxiliary projects, Angel Tree holds a special place.

“Seeing the Christmas Angels. Seeing the parents drive up in their cars and get their bag at Christmas time where they thought they wouldn’t have anything. They show you how grateful they are. Your heart breaks sometimes when you see the less fortunate, and we can’t save everybody, but we try to make a difference — opening a door for someone; giving them an entry.”

While the Salvation Army takes up the majority of her time, James-Brown said she is also involved with the American Cancer Society Relay for Life, in part because cancer has affected her family.

Her involvement with Relay for Life started when she was an employee at the U.S. Army’s Engineer Research and Development Center.

“I started out working on a team at the Vicksburg District,” she said, adding at one time her office at ERDC was consolidated at the District.

“I guess about 2000, we put a team together for the Vicksburg District and we had a team every year until I moved back to ERDC in 2008.”

She now works with the Warren County Relay for Life leadership team.

She is also a member of the Negro Business and Professional Women’s Organization, which performs community service projects, offers scholarships to high school students and honors community leaders.

She attends New Mount Zion Church, where she is a chairman of the church committee and sings in the choir.

And she has no plans to slow down.

“I won’t stop as long as the good Lord gives me health and strength, I plan to get up every morning and try and make a difference in someone’s life. It’s been fulfilling to me personally to know God’s blessed me so I can bless others.”

The weather was warm and the music was on occasion hot Saturday night as the Mississippi Symphony Orchestra presented its... read more