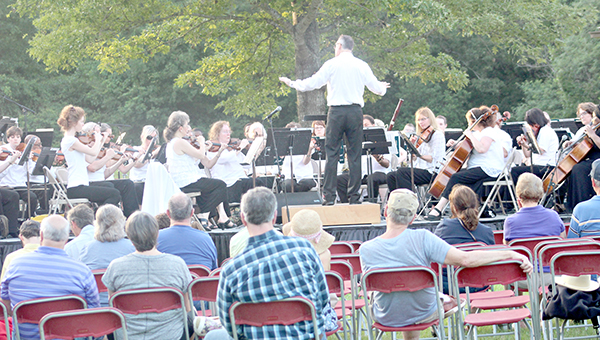 PERFECT EVENING FOR A CONCERT: Mississippi Symphony Orchestra conductor Crafton Beck directs the orchestra during the performance of a piece written solely for string instruments at Saturday’s concert at the Vicksburg National Military Park.

The weather was warm and the music was on occasion hot Saturday night as the Mississippi Symphony Orchestra presented its annual Memorial Day concert at the Vicksburg National Military Park.

“We probably have about 600 to 650 people here,” said Bess Averett, director of the Friends of the Vicksburg National Military Park and Campaign, which helped sponsor the event.

Most of the people attending the concert took refuge from the late afternoon sun in the shade from several large oaks near the concert, creating a sea of chairs and blankets as people got comfortable.

Others chose to brave the harsh sun and take seats closer to the stage.

“This is our first time here; we moved to Vicksburg in August,” said Steve Fadden who with his wife Amy was enjoying a tray of cherries, cheese, sausage and smoked trout Fadden caught and smoked himself.

“This is a great opportunity to get out and enjoy the park and hear good music,” he added.

“This is just a wonderful event, and you have to give credit all the volunteers who gave up their holiday to come out here and help make this happen,” Amy Fadden said.

“We have a customer who comes into our shop who plays in the Mississippi Symphony,” he said. “He told us about it and we decided to come and see.”

Ben Nelson, a Clemson University student from Salt Lake City and a contract student working at the U.S. Army Engineering Research and Development Center, said he was told about the concert from Jimmy Fowler a co-worker, who had attended the concerts for the last five years.

“I thought I’d come check it out,” Nelson said.

Most of the heat from the stage came from The Patrick Smith Band, which preceded the orchestra and played a series of selections from rock to the blues.

The Mississippi Symphony played a light “pops” type concert, featuring a mix of popular tunes, rock, show tunes and marches, starting with the Henry Mancini composition of the theme from the 60s detective television show, “Peter Gunn,” and the moving into some selections written only for string instruments, the John Philip Sousa march “Hands Across the Sea,” and classical selections before winding up the first part of its performance with a medley of tunes from “My Fair Lady.”

The second part of the program continued the theme, opening with a medley of Muppet tunes and ending with Sousa’s “Stars and Stripes Forever.”

“We’re very pleased with the turnout,” Averett said. “We like to see new people coming to the park. There were a lot of familiar faces, but we’ve seen some people we’ve never seen before.”

The Lincoln County sheriff’s deputy killed in the line of duty overnight Sunday was described as a “mild-mannered officer” who loved... read more